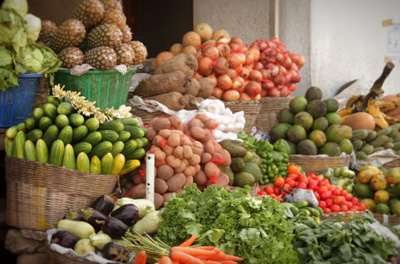 WASHINGTON –A new World Bank report “Growing Africa: Unlocking the Potential of Agribusiness,” says that Africa’s farmers and agribusinesses could create a trillion-dollar food market by 2030 if they can expand their access to more capital, electricity, better technology and irrigated land to grow high-value nutritious foods.  The report calls on governments to work side-by-side with agribusinesses, to link farmers with consumers in an increasingly urbanized Africa.

Good prospects: Africa’s food and beverage markets are projected to reach $1 trillion by 2030. By way of comparison, the current size of the market is $313 billion, offering the prospect of a three-fold increase, bringing more jobs, greater prosperity, less hunger, and significantly more opportunity enabling African farmers to compete globally.

Performance boost needed: Africa’s agriculture and agribusinesses are underperforming.  Many developing countries such as Brazil, Indonesia, and Thailand now export more food products than all of Sub-Saharan Africa combined.  Even as export shares are falling, import of food products is rising.  The report argues that these adverse trends can be reversed through good policies, sustained public-private investment, and strong public-private partnerships backed by open, transparent procedures and processes along the entire value chain.

Untapped land and water: Africa has more than half of the world’s fertile yet unused land.  Africa uses only two percent of its renewable water resources compared to the global average of five percent.  Post-harvest losses run 15 to 20 percent for cereals and are higher for perishable products due to poor storage and other farm infrastructure.

While pointing to the need for significant investment in infrastructure the report carries an unequivocal warning: in the rush to allocate land for agribusiness, care needs to be taken so that acquisitions do not threaten people’s livelihoods and land purchases or leases are conducted according to ethical and socially responsible standards, including recognizing local users’ rights, holding consultations with local communities, and paying fair market-rate compensation for land acquired.

The report took an in-depth look at entire value chains – the process for taking products from farms to markets – for five commodities, rice, maize, cocoa, dairy and green beans.  Africa is the world’s leading importer and consumer of rice, paying US$3.5 billion for import bills. By increasing rice production, Senegal can help meet local demand but more capital is needed together with greater investment in irrigation and easing restrictions on access to land. Ghana, another top importer, produces more varieties of rice but at significantly higher cost.

Although much of Eastern and Southern Africa is well suited to dairy production, only Kenya has established a competitive dairy industry. Kenya’s industry is based partly on a formal sector for processed milk and other dairy products, but its dynamic informal sector (based mostly on raw milk) is even more important, supplying over 80 percent of the market. Kenya’s success largely comes from the entrepreneurship of smallholders’ who choose high milk-yielding cross-bred cattle, improved feeds and paid better attention to animal health.  Also, Kenya success points to the importance of improving linkages to the formal sector through cooperative milk collection and milk cooling centers. Even though challenges remain government policy, especially flexibility in setting quality and safety standards for the informal chain were vital.

The report says agriculture and agribusiness should be at the top of the development and business agenda in Sub-Saharan Africa. Strong leadership and commitment from both public and private sectors is needed.  For success, engaging with strategic “good practice” investors is critical, as is the need for strengthening of safeguards, land administration systems, and screening investments for sustainable growth.  Concluding on an upbeat note, the report says Africa can draw on many local successes to guide governments and investors toward positive economic, social and environmental outcomes.