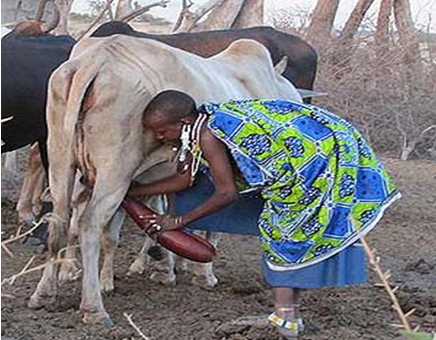 The Maasai tribe is located in East Africa. They live in southern Kenya and northern Tanzania along the Great Rift Valley on semi-arid and arid lands and occupy a total land area of 160,000 square kilometers with a population of approximately one half million people. The people are pastoral farmers keeping and grazing cattle, serving as a source of food and wealth.

Proudly maintaining their tradition and cultural identity, the Massai live in pastoral communities, with their women engaged in milk trading, using the income to support daily family needs. Yet the Maasai women often face numerous challenges as traders. Due to lack of transport to main market centers, they face difficulties of selling their dairy products.

Lack of fodder to feed the cattle, renders the cows less productive, leading to the scarcity of milk. They often lack water too. Thanks to ‘Technoserve’ a nonprofit organization that develops business solutions to small-scale business entrepreneurs facing poverty, by linking people to information, capital and markets. ‘Technoserve’ has been the source to the flourishing dairy business of the Maasai women by helping to generate income and creating jobs.

Being in existence over more than four decades ‘Technoserve’ is helping Maasai women, transform their lives by improving their business skills and practicing effective dairy farming techniques. In collaboration with Agribusiness Development Program, Technoserve offers support to more than 19,000 small-scale dairy farmers, leading to the establishment of the first dairy plant in Kenya, belonging to Maasai women.

‘Technoserve’ has raised the standard of many women by establishing Maasai Women Dairy as a formal cooperative and educate farmers on the benefits of collective milk marketing. ‘Technoserve’ continue to train, leading to the establishment of cooperatives, giving the chance for many to taste success and inspire others.

Today the number of Maasai Women Dairy has increased significantly to more than 3,200 active members, increasing its sales and production to the peak of more than 7,100 gallons of milk per day.

Translate »
We use cookies to ensure that we give you the best experience on our website. If you continue to use this site we will assume that you are happy with it.Ok