Johannesburg Stock Exchange (JSE) has moved to consolidate its position as a leading bourse in Africa following the launch of the first currency futures which track the exchange rate between the Rand and select African currencies.

The JSE listed three new currency futures contracts which track the exchange rate between the Rand and the Zambian Kwacha, Kenyan Shilling and Nigerian Naira. 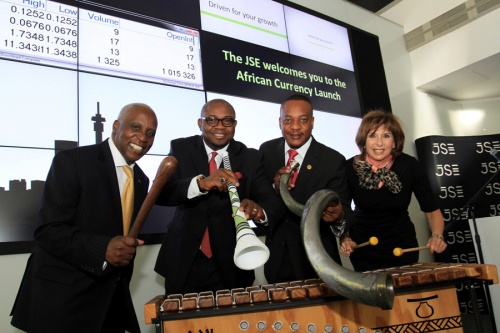 The move to launch the currency futures will allow investors as well as importers and exporters to protect themselves against the currency movement in the foreign country.

“With Africa being a global investment destination it makes sense for the JSE as a major exchange player in Africa to be involved in providing appropriate products to mitigate currency risk and exposure when dealing in Africa,” said Warren Geers, General Manager, JSE Capital Markets.

The JSE has partnered with Barclays Africa and specialist brokers, Tradition Futures, to bring this new offering to market.

“Our involvement with the listing of the African currency futures on the JSE further deepens Barclays Africa’s commitment to growing markets participation in Africa. As part of our vision to be the ‘Go-To’ bank, we strive to give our clients superior execution and access to the continent through world-class and leading innovation,” stated Lourens Harmse of Barclays Africa.

Andrew Gillespie of Tradition Futures noted the launch of the currency futures is a groundbreaking development to have a transparent, independent, well regulated platform to mitigate or assume FX Risk in these African countries against any other currency of their choice – that does not prejudice anyone, irrespective of size, domicile or nationality.

“The ability to transact anonymously and to have access to full and fair, timeous price discovery is an international benchmark requirement for a developed market. This allows for a level and fair playing field, where the best price is available to all, without bias or favour, which is a significant facet and feature of this market in African FX on the JSE,” he added.

The new futures contracts will provide the market participants with the ability to get exposure on the JSE to the exchange rate between the US Dollar and the Zambian, Kenyan and Nigerian currencies through trading synthetic cross currencies.

For example, investors can get exposure to the exchange rate between the US Dollar and the Kenyan Shilling by trading both against the Rand. To promote cross-currency trading the JSE will charge trading fees on only one of the foreign trade logs and not both.