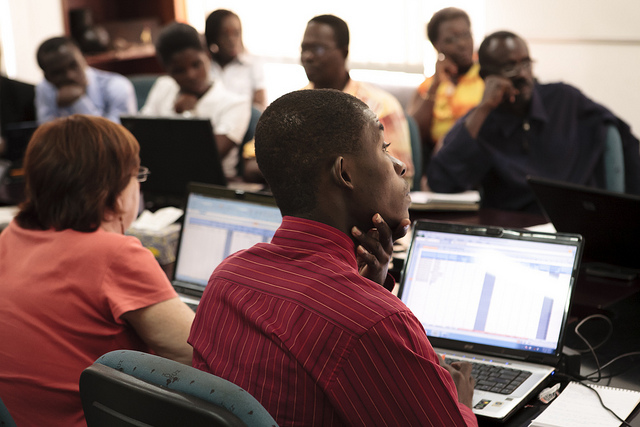 While “Africa Rising” makes for a great hashtag, there has yet to be quantitative evidence that African economies are growing in any meaningful way. The cultural hope to bring good news about African economies is great, and is contributing to a fudging of numbers on the part of huge news organizations and personal finance blogs. And while the news that exists isn’t always dour, it is rarely cause for jubilation either. The story that should be told, such as it is, is somewhere in between. The reality is largely unmeasured and unknown.

There are some indisputable facts about African economic development. Certain infrastructures are on the rise, and in terms of import and export, Africa is at a level never unimaginable just two decades ago. But what do these improvements mean for general poverty, income, education, health, and social mobility? For nearly all of the continent, these metrics have not been evaluated. The extent to which they have is not sufficient to warrant “Africa Rising” headlines.

Following the most recent US Africa summit, the internet became abuzz with statements like “7 of the 10 fastest growing world economies are in Africa.” Would that this were true, but its hype built on murky or nonexistent facts. In 2011, the Economist cited facts about 81 medium to large countries and their recent economic development. Of these, 28 were African. Because African nations were excluded from 1961’s Organisation for Economic Co-operation and Development, the researchers were able to measure these nations’ performance against that of the OECD countries. Largely because the African countries were starting in 1961 from a place of comparative underdevelopment, many of them showed statistically greater development in the intervening years. But that doesn’t quite have the ring to it of “7 out of 10…”, though it does have the advantage of being true.

To put the last nail in the coffin of this particular meme, the “7 of 10” number was actually based on the Economist’s forecasts of these economies. Being that the future has not yet occurred, it isn’t possible to base such a headline on these forecasts. It is estimated the 50% of the total population is missing from economic figure in nations as large and populous as Ghana, Ethiopia, and Nigeria. To say that these nations are averaging an annual GDP growth of 7% is not exactly untrue, but is at the very least inaccurate and unable to be established.

All this as it is, there are plans for a widespread statistical analysis of the Ghanaian economic situation, including numbers on crops, livestock, construction, and domestic trade, scheduled for next year.

The promise of such statistical analysis is promising. For those of us who hope to see enormous economic growth in Africa, these numbers will be fascinating to see. But for nations like Kenya and Ethiopia, as populous as they are, real research and analysis has yet to surface. For this we wait and hope. One day, the 7 of 10 figure will hopefully be accurate.