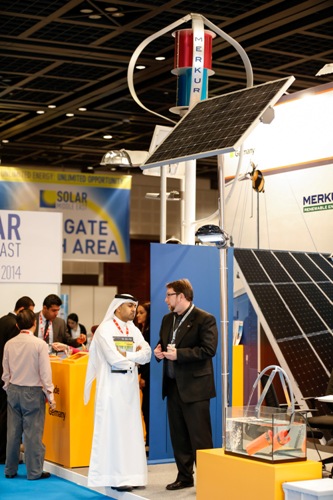 Under a reverse auction, the government invites competitive bids from (solar and other) project developers to supply a specified amount of electricity from a certain renewable energy technology over a predetermined period of time. The successful bidder offering the lowest price per kilowatt or megawatt per hour is awarded a long-term power purchase agreement (PPA) at its winning bid.

“The key advantage involves achieving cost effectiveness. A well designed reverse auction can effectively bridge the gap between the current state of the market and the market for low – emission technologies urgently required by the global community. Reverse auctions drive product volume and installation, assist in delivering competitively priced electricity and can provide a credible and secure financial return over the long term to both developers and financiers,” said Kelly.

As part of its program to reach energy diversification goals for 2030, Dubai launched the Mohammed bin Rashid Al Maktoum Solar Park in 2012, and the Dubai Electricity & Water Authority (DEWA) opened a tender for a 100 MW solar power plant for the second phase of this Solar Park in 2014.

The solar park launched with a 13 MW solar PV plant in 2013 and its ultimate goal is to generate 1,000 MW by the summer of 2017. DEWA called on solar project developers to submit their bids for a fixed tariff over a 25-year period under a Build-Own-Operate (BOO) model.

Of the two dozen solar developers who started, only 10 remained by the final round of bidding. In the end, Riyadh-based Acwa Power (owned by eight Saudi conglomerates) bid a world record low tariff of just under 6 cents/kWh. To get an idea about how aggressive this is, consider that the average of the 10 finalists’ bids was 9.35 cents/kWh, with the highest bidder being the Chinese Huaneng Power International at 14.71 cents/kWh.

In light of these results of the DEWA auction, existing, outdated roadmaps and assumptions for the cost and complexity of procuring and installing solar that many of the GCC’s regional governments have so far based their plans on will need to be revised; there is little excuse now to further delay solar procurement programs.

Looking ahead, a key challenge in the Gulf region will be to further develop the tender framework for renewable-energy projects.

“A key challenge for the efficient deployment of more renewable-energy capacity in the Gulf region will be to adapt the conventional power order to renewable procurement. Reverse auction mechanisms for renewable energy procurement (including large scale solar) have been successfully implemented in several jurisdictions around the world, including California and the Australian Capital Territory – precedent therefore exists to make these sorts of projects happen.

Economies of scale will apply and the speed and flexibility of renewable-energy deployment will be further increased through added competition”, added Kelly.