BRAZZAVILLE, Republic of the Congo, March 4, 2015/African Press Organization (APO)/ – Central African countries have been once again admonished to increase their efforts at achieving the kind of regional integration that will foster sustainable growth in all the economies of the sub-region, especially in terms of monitoring the benchmarks of macroeconomic convergence they have set for themselves. The call was made this Tuesday in Brazzaville, at the close of an ad hoc expert group meeting on the progress and prospects of macroeconomic convergence in the sub-region, organised by the United Nations Economic Commission for Africa (ECA) (http://www.uneca.org) in collaboration with the Government of the Republic of Congo. 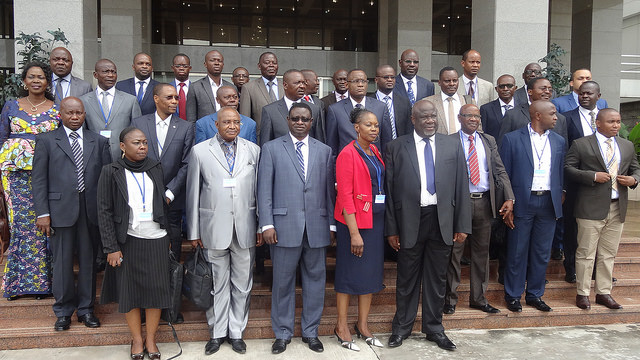 The brainstorming session that brought together some sixty experts for two days, was dedicated to the review of the progress made by CEMAC States on four select criteria of macroeconomic convergence and on lessons to be learnt from this experience by the Economic Community of Central African States (ECCAS), in order to achieve macroeconomic convergence in the sub-region. This step is regarded as decisive toward the eventual creation of an African Economic Community and the establishment of a single currency on the continent in 2021 as envisaged by the Abuja Treaty came into force in 1994.

While it stands that all CEMAC member countries (Cameroon, Congo, Gabon, Equatorial Guinea, the Central African Republic and Chad) performed well in relation to the multilateral monitoring criterion on convergence which sets the public debt ratio (internal and external) at less than or equal to 70% of GDP, it is not the case for the other three convergence indicators. These include: maintaining a positive or zero-base budget balance; making sure annual inflation rates don’t get beyond 3%; and ensuring there is no accumulation, by each State, of domestic and external arrears on the management of the current period.

In light of the disparate and weak performances recorded, the experts implored the concerned member States to ensure greater ownership of the various facets of multilateral monitoring. They also indicated that member states of CEMAC should strengthen the capacity of stakeholders particularly in the collection and processing of statistics, while providing national monitoring cells with the requisite human and financial resources.

On the broader issue of macroeconomic convergence in the whole of ECCAS, the experts recommended to governments and partner institutions in the sub-region to continue the process of rationalization by developing a dashboard to facilitate the extension of the CEMAC convergence framework to all ECCAS countries. In the same vein, they asked CEMAC to associate the General Secretariat of ECCAS in its macroeconomic convergence monitoring missions.

Also, and among other recommendations, they invited ECA to initiate capacity building programmes for States and institutions for the optimal monitoring of countries’ standing vis-à-vis the established benchmarks, and to help overhaul their statistical systems to produce reliable data on convergence.

The experts were strongly encouraged in their deliberations by the Chief of Staff of the Minister Delegate in charge of Planning and Integration at the Ministry of State, Ministry of Economy, Finance, Planning, Public Investment and Integration of the Republic of Congo, Pascal Bobassa Ebale, who said he was pleased that despite the delay in the development of convergence programmes by some member States, “the convergence programme of CEMAC is fully operational.”