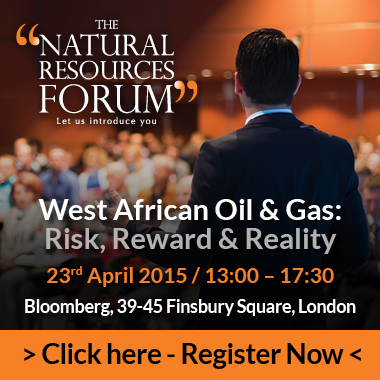 The Natural Resources Forum, London’s leading independent investor forum for institutional, industry and capital markets professionals, is pleased to announce its next event, tackling the risks, rewards and reality of oil & gas industry in West Africa. The event will bring together the key decision makers from corporate, advisory and financial organisations working in the region. It will be tailored to a range of attendees including oil & gas companies, investors, financiers, sector analysts and government representatives.

The invitation-only event will take place on 23rd April 2015 at Bloomberg, 39-45 Finsbury Square, London, EC2A 1PQ. To find out more and to register, please visit: http://naturalresourcesforum.com. Regular Forum attendees are kindly asked to note the change of venue on this occasion.

–         Three of the ten largest global discoveries in 2013 were made in West Africa (Nigeria and Congo), Angola and the Jubilee field offshore Ghana which was the largest discovery of the past decade

–         Offshore West Africa is part of what is known as the ‘Golden Triangle’ – one the most prospective areas of deep offshore globally – the Gulf of Mexico and Brazil making up the other two corners. The Niger Delta and West African pre-salt reservoirs mimic the prolific pre-salt Santos from offshore Brazil

The Forum’s keynote speakers and company presenters will provide their insights into the West African oil & gas industry. In particular, the event will focus on the sometimes stark reality of investing and operating in West Africa relative to other global regions.

About the Natural Resources Forum

The Natural Resources Forum is an independent forum created specifically for professional investors and industry advisers to hear from, and meet with, high quality companies that are developing noteworthy investment opportunities. It is a strictly by invitation only forum.