Every day more than 6’000 men worldwide are being diagnosed with prostate cancer. Often the tumor is only detected in a later stage, which causes success rates for treatment to sink drastically. In order to increase awareness about prostate cancer among men over 45, the Swiss Prostate Cancer Research Foundation has launched this new app, which focuses on informing users and helping them make decisions regarding their prostate health. The app for Android and iOS systems was developed based on the most comprehensive long-term study of prostate cancer screenings, which has been conducted in the German-speaking region. The app calculates the likelihood of prostate cancer based on the user’s individual data such as prostate-specific antigen (PSA) levels. The individual data allows the app to determine the amount of time until the user should schedule another screening, while at the same time prompting the user to get abnormal results checked out sooner. 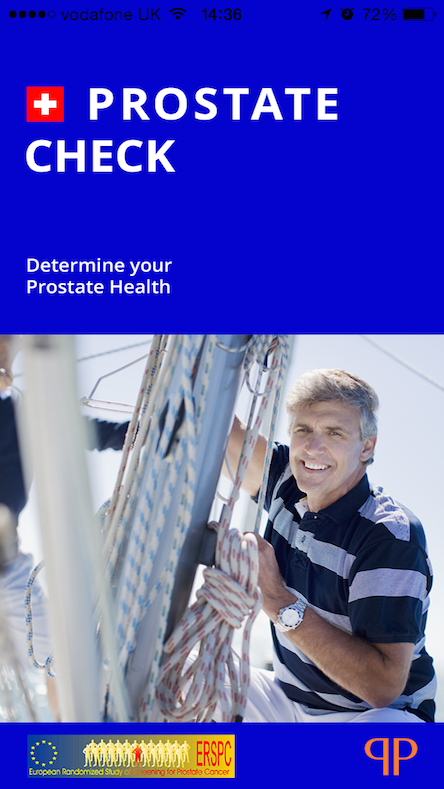 “The ProstateCheck app is intended to remind men to get screened for prostate cancer early on”, explains Prof. Dr. Franz Recker, Chairman of the Swiss Prostate Cancer Research Foundation and Head of the Urological Institute at the Aarau Cantonal Hospital. “At the same time, it is important that we move away from insisting that everyone gets screened annually and instead focus on screenings for those who are at risk.” ProstateCheck, which was developed by Dr. Recker and his colleague Dr. Maciej Kwiatkowski, prevents unnecessary examinations. According to Dr. Recker, not every tumor that is detected early on needs to be treated; however, it is vital that tumors that require treatment are detected early. Between 30% and 40% of men will have tumor cells in their prostate at some point that do not require treatment. However, between 4% and 8% of men will develop a malignant tumor in their prostate.

The ProstateCheck app requires the user to enter medical data that he receives from his doctor during an ordinary check-up. Alongside required information such as the PSA level and the age of the user, information about any family history of prostate cancer, the results of the palpation, and the volume of the prostate increase the precision of the ProstateCheck prognosis. Based on the information the user provides, the app uses specially developed algorithms to calculate the probability of the existence of a malignant tumor. Besides, the probability of the user developing prostate cancer in the next four, eight and twelve years is calculated. The app can extend the amount of time between screenings by up to seven years. The resulting reduction in the frequency of prostate examinations will serve to increase the efficiency of medical screening processes and thus greatly reduce the cost burden on the health-care system. This is the first time that such quick and accurate analysis is available, which not only allows private individuals, but primarily general practitioners and specialists to profit from ProstateCheck.

The calculations generated by the ProstateCheck app are based on data from the Swiss Prostate Cancer Screening Study, which is part of the European Randomized Study of Screening for Prostate Cancer and was funded in part by the Swiss Prostate Cancer Research Foundation. Over an observation period of 14 years, the study examined more than 10,000 participants in the German-speaking region of Europe. The multiple parameters that are built into the risk calculators allow for more efficient and earlier preventative care than the decisions that were made previously solely based on PSA levels.

The App for testing

The ProstateCheck app is available for download from 2 Euros in the Apple App Store and the Google Play Store for Android devices. The results are also being sent to you as a PDF by email. The app is available in English, German, Hindi, Chinese, Arabic and Spanish. For journalists the app comes along with a Free Code. To test the app, please insert following Username and Password under “Code”: