The sub-Saharan African (SSA) economy has more than trebled in size since 2000 and, despite some challenges, the region is expected to maintain economic growth rates of between 4 percent and 5 percent until 2020, to reach an estimated GDP of US$3.5 trillion.

Strong domestic demand, infrastructure spending, and inward investment makes SSA a prime destination for many of these companies looking for high returns and sustained growth. Currently, the region accounts for at least 3 percent of the global demand for adhesives and sealants; however the market is growing almost twice as fast as Western Europe and the United States.

Growth is driven by Mega Trends such as population growth and emerging middle class, where more of the population are bridging the poverty line and floating middle class into a more well-off middle income bracket. Urbanisation is another major African Mega Trend with sub-Saharan countries such as South Africa, Ghana and Nigeria already having urbanisation rates of more than 50 percent and some metropolitan areas having urbanisation rates of almost 90 percent. A number of countries in SSA are expected to average at an urbanisation rate of approximately 75 percent by 2025. This in turn drives the main adhesive markets, including the construction and building industry as well as the packaging industry. Furthermore, countries in Africa are increasingly adopting political, social and economic reforms that attract inward investment.  According to the World Bank, in the period from June 2013 to June 2014, 35 of the 47 economies in the SSA region have implemented at least one regulatory reform that makes it easier to do business. This amounts to 75 reforms in total. 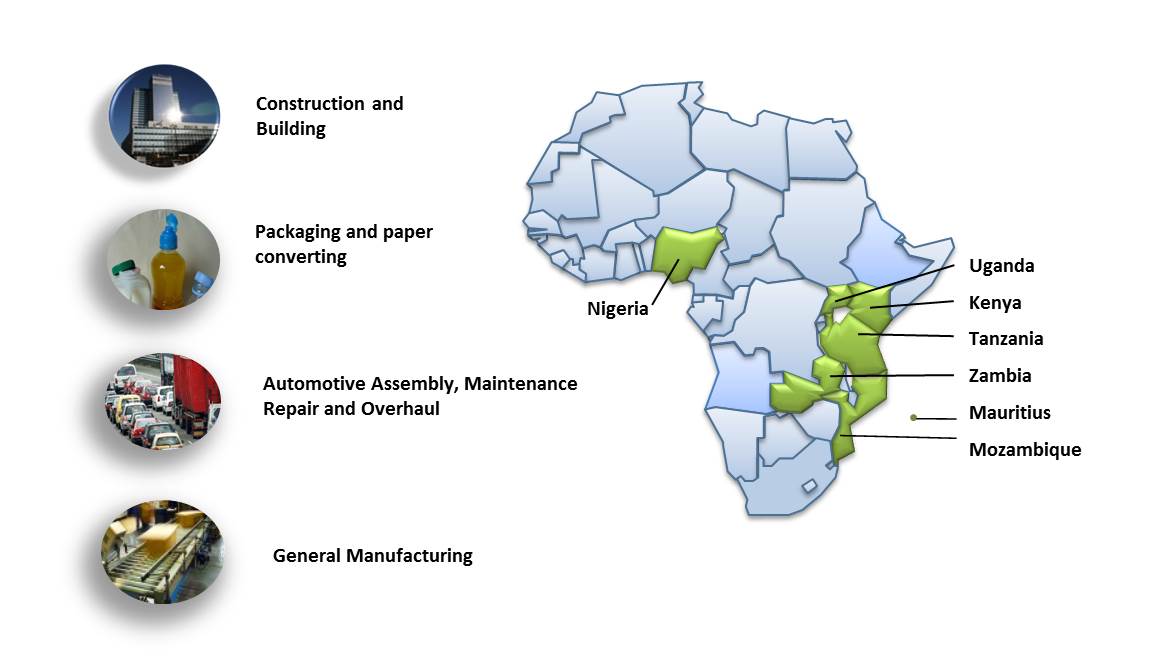 The US$30 billion dollar global adhesives industry has entered a period of cautious optimism which has turned the market into a hot bed of activity. Mergers and acquisitions in the industry have surged in the past few years and are poised to continue on a strong course in 2015 and beyond. Some of the factors that underpin this activity include: 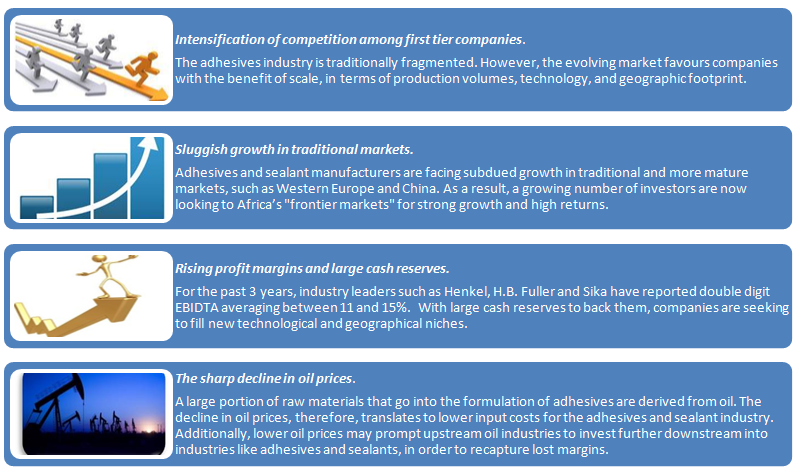 In line with global trends, the market in Africa is experiencing consolidation as small- and medium-sized participants are acquired by larger entities. In the period between December 2014 and March 2015, four global entities have entered new African markets, mainly through mergers and acquisitions.

Not only are international companies looking to invest into Africa, locally based companies are also looking to expand their business, which to date has largely been confined to regions of strong growth like Kenya and South Africa.

Kenya, Nigeria and Mozambique are frontier markets for Industrial Adhesives. These markets will become increasingly important to the adhesives and sealants industry as African economies become less reliant on the extractive industries – like oil and gas or mining – and start to develop in terms of construction (infrastructure) and manufacturing.

Although infrastructure projects in the country have stalled, there is a potential for Kenya to become a major oil producer in the future. The first commercial oil discovery in Kenya, made in early May 2014, is estimated to be worth $10 billion. This grows the Kenyan adhesives market through the emergence of new end users. It will also make some imported raw materials such as polythene and toluene readily available, thereby reducing dependence on the international market, which is currently unreliable.

In October 2014, Kenya was reclassified a middle-income country after statistical reassessment of its economy increased its GDP size by 25.3 percent. The high growth rate of the Kenyan economy has resulted in a surge in the middle-class population from 19 percent to 24 percent over the same period, and demand for consumer products has been growing at an average rate of 10 percent to 20 percent annually.

Kenya’s consumer spending has been spurred largely by all-round economic reforms that have led to an overall development in many sectors. Subsequently, disposable income of the rising middle class has increased in the country. Kenya’s manufacturing industry is advancing faster than surrounding countries. Demand for goods such as cars, packaged material and construction chemicals are increasing rapidly and sales of adhesives are expected to increase in tandem with the growth in manufacturing industries. Additionally, imports of plastic materials, resins, and cement sales into Kenya have been registering a steady growth in the last 2 years. This is an excellent indicator of the growth in demand for adhesives in packaging and construction.

The shale gas boom, coupled with high demand from other end users, has resulted in shortages of feedstock such propylene, benzene, and toluene – which are by-products of oil refining processing. The use of lighter feeds in oil cracking has increased pricing for petroleum derivatives and; subsequently, the cost of manufacturing of adhesives.

With oil prices falling in Nigeria, investors are looking to tap into the downstream process in order to recapture lost margins. For example, the Dangote group constructing a refinery with capacity to process 650,000 barrels of crude oil per day. The plant, which is expected to be fully functional by 2017, will be among the largest petroleum refineries in the world. Projects such as this are expected to create a readily available source of raw materials for adhesives manufacturers in the region.

Natural gas is expected to play a key role in the future Mozambican energy market, with the following possible downstream mega projects:

Gas-fired power generation: It is estimated that generation capacity must increase by 10 percent annually in order to meet the expected development of the country’s economy and power demand. Fertiliser production projects could make economic sense, with agriculture being the most important source of income for Mozambicans (around 30 percent of the GDP). Increasing agricultural activities are likely to stimulate growth in the food packaging sector which will create a demand for adhesives.

Gas-to-liquid (GTL) projects: Fuels – Mozambique currently imports gasoline, diesel, kerosene, liquefied petroleum gas (LPG), and other fuels. Constructing a GTL plant could make economic sense, provided natural gas can be supplied at reasonable prices and crude oil prices recover to their previous levels, as it would allow the country to decrease expensive fuel imports. Methanol production for export purposes is another possible option thanks to the country’s low-cost and reliable source of gas.

Should policy conditions be met, additional gas pipeline infrastructure will flourish in the next 15 to 20 years and will also serve the commercial and residential sectors for process heat and transportation purposes, thereby stimulating the local economy. This in turn is expected to create a larger demand for adhesives for construction, manufacturing and packaging, as these industries are expected to grow in line with the economic development.

A change in strategy is needed to adapt to a new, consolidated competitive environment

In order to remain relevant, adhesives manufacturers in Africa need to rethink their strategy. As larger entities continue to purchase smaller adhesive and sealant manufacturers, consolidation is expected to increase, leading to the creation of larger companies with diverse product offerings spanning a variety of markets. This will force current market participants to readjust their strategies to match a new playing field, one consisting of larger players with boundless purchasing power and formidable research and development (R&D) capabilities. Additionally, the business model for industrial adhesives in Africa is becoming increasingly consumer driven, with a strong focus on educating customers about existing products, new products, and innovations. Frost & Sullivan is well positioned to support companies in their market entry strategies and business models for Sub-Saharan Africa and can offer opportunity sizing, competitor analysis, distribution and distributor optimisation, as well as key strategic insights into what this means for the organisation. For more information, please see our analysis on the Future of the Chemicals Industry in Africa