The number of planned hotel rooms in Africa has soared to 64,000 in 365 hotels, up almost 30% on the previous year, according to new figures from the annual W Hospitality Group Hotel Chain Development Pipeline Survey.

The increase is largely down to strong growth in sub-Saharan Africa, which is up 42.1% on 2015 and is significantly outstripping North Africa which achieved only a modest 7.5% pipeline increase this year.

A major shake-up in the rankings by country saw Angola, never before listed among the top 10, push Egypt out of second place, due to a major deal there signed by AccorHotels.

The W Hospitality Group survey is published ahead of the African Hotel Investment Forum (AHIF), which is organised by Bench Events. The conference attracts all the major international hotel investors in Africa and is being held for the first time in Lomé on 21-22 June. A second AHIF will also take place in Kigali, Rwanda on 4-6 October.

The IMF forecast for economic growth in sub-Saharan Africa is for an increase of 4% this year and 4.7% in 2017, up from 3.5% in 2015. Overall this is down on the 5-6% increase enjoyed over the past decade, but it’s still double or more the forecast for the world’s advanced economies, such as Europe, the USA and Japan.

Matthew Weihs, managing director of Bench Events, said:  “Africa is still on the up. For business, trade and capital investment, the continent remains an attractive proposition, leading to continuing demand for accommodation and other hospitality services.”

This is the eighth annual pipeline survey, widely recognised as the most authoritative source on hotel industry growth in Africa, particularly in revealing data on international chains signing new deals.

The 2016 survey provides a full picture of hotel development across the continent – 36 hotel chains and 86 brands with more than 64,000 rooms in 365 hotels.

In comparison to figures from the inaugural survey in 2009, it’s possible to see how far hotel development in Africa has come. In 2009 there were 19 international and regional hotel chains contributing, with a pipeline of 144 hotels and just under 30,000 rooms.

Overall in the 2016 report, it’s Angola that dominates. In July last year, AccorHotels signed with AAA Activos LDA for the management of 50 hotels with around 6,200 rooms.  All are under construction and many are ready to open.

Across the continent, the north-south divide on hotel development continues. In 2011, the number of pipeline rooms in the five countries of North Africa was about 25 per cent higher than that in sub-Saharan Africa. Today, it is less than half.

Trevor Ward explained: “There are two reasons why development activity in North Africa is now somewhat subdued. Firstly, the markets there are more mature and have already seen much development, so there are fewer opportunities for new hotels. Secondly, there is the political turmoil – in Libya, which has seen a 40% drop in the pipeline, and also Egypt, parts of which are experiencing drastic reductions in the number of tourists.”

Nigeria remains the country with the most rooms in the pipeline, up 20% on 2015.  Together with Angola, the two countries account for 17,782 rooms between them, almost 30% of the total pipeline and 40% of the signed rooms in sub-Saharan Africa.

Despite the promising 2016 survey findings, Trevor Ward cautioned on the number of hotel deals that have been signed but have so far not opened, for a variety of reasons but primarily a lack of finance. “Between 2006 and 2013, 104 deals with 21,377 rooms, over 30% of the total, were signed and should now be open, or at least well under construction”. 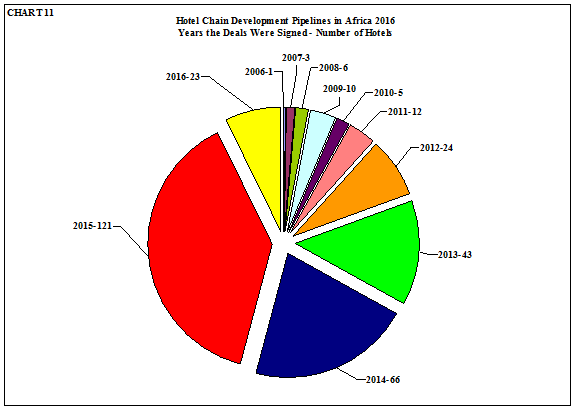 Trevor Ward said: “If all those involved – the investors, chains, consultants and lenders – can bring these deals to fruition, the pipeline of the future will result in the much-needed expansion of Africa’s hotel industry.”

The 2016 survey will be discussed in detail at AHIF in Lomé in June. Matthew Weihs, said: “The 30% increase in the hotel development pipeline is astonishing and clearly demonstrates that Africa still has fantastic potential for further growth.”

AHIF is the pre-eminent event for international investors in hotels in Africa.  It takes place in Lomé, Togo on 21-22 June 2016, at the new flagship Radisson Blu Hotel du 2 Février. The second AHIF will take place on 2-4 October at the Radisson Blu Hotel & Convention Center, Kigali, Rwanda. For more information, visit www.Africa-Conference.com.