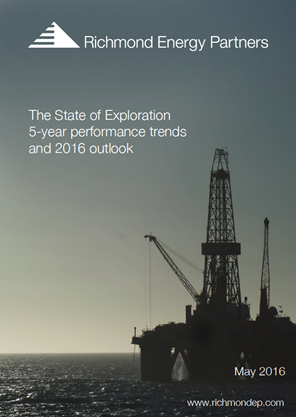 On 4th of May REP published its seventh annual ‘State of Exploration’ report, which benchmarks the performance of international conventional oil and gas exploration. The report has grown to become one of the definitive global benchmarks in the E&P sector.

In a world awash with the stuff, new oil discoveries continue to be elusive. Global exploration drilling in 2016 is forecast to be down 73% on 2014 with discovered oil volumes at a decade low, according to Richmond Energy Partners’ annual ‘The State of Exploration’ report.

Dr Keith Myers, Managing Director, comments, “Industry has responded to the downturn by slashing exploration budgets by over 70% on average. Sustained oil prices above $60 per barrel are needed to stimulate exploration.  The geology economic to explore at $40/bbl is actually quite limited”.

The report is based on the analysis of more than 1100 exploration wells and covers a total of $49bn of exploration drilling spend since 2010.

A few highlights from the report:

·       Commercial oil discoveries fell to an 8-year low in 2015 as plays mature and the frontier programme fails to replenish prolific emerging oil plays. $17bn of frontier drilling spend over 5-years generated 16 new commercial plays in 12 different basins at a commercial success rate of 8%.

·       Headline drilling finding costs fell in 2015 due to some large deep water discoveries in Mauritania and Egypt, but oil finding costs reached an 8-year high of $4.3/bbl.

·       Fewer than half of the 40 study group companies replaced production through conventional exploration over 5 years, though 25% made discoveries that transformed their resource bases. This leaves the door open to more M&A activity.

·       Exploration drilling completions in 2016 are expected to be 57% below 2015 levels and down 73% from the 2014 pre oil price crash levels. A diminished frontier campaign continues with 19 wells planned and a continued focus on the Atlantic Margins.

Dr Keith Myers said, “Industry has learned some hard lessons from the downturn – many companies overcommitted to drilling wells in order to access acreage. ‘The State of Exploration’ report makes it clear that the increased drilling did not lead to more success and that the risks of certain plays were systematically underestimated.

While exploration strategy is being reset across the industry, there is a real opportunity for companies. The transition from financial crisis, to a growth crisis once oil prices recover, will be rapid. Those that can maintain investment and upgrade their portfolio through the cycle will be the ones to prosper”.