Despite a local and global economic landscape characterised by unusually high levels of economic and political uncertainty, the South African property market remains remarkably resilient, according to the Winter 2016 issue of ‘The Study’, a report which incorporates the Pam Golding Residential Property Index.

Published by Pam Golding Properties Research, The Study provides insights into the dynamics of the residential property market.

The report says in part this resilience reflects pockets of strength in the national housing market, such as the booming Western Cape market, but it is also attributable to the structural underpinning of a young population and the growing influence of first-time buyers. As a result, property – both local and offshore – can provide an excellent investment opportunity during what can only be described as uncertain times.

Dr Andrew Golding, CE of the Pam Golding Property group, says the continued resilience of the South African housing market in 2016 has supported a better than expected market performance, given that it is occurring against a background of persistently weak economic growth and a slow, but steady increase in interest rates.

After averaging at a 6.4 percent increase during the first quarter, the Pam Golding Residential Property Index reveals that national house price inflation continued to strengthen, rising by 6.7 percent in May 2016 from prior year levels.

In part, the continued rise in national house price inflation may be attributable to the resurgence in general consumer inflation in recent months, with an average inflation rate of 6.7 percent forecast for 2016 – up from 4.6 percent last year. This has resulted in renewed price pressures throughout the national economy, including the housing market.

Says Dr Golding: “It seems the strength of the national housing market is largely attributable to two dominant trends – the continued, robust outperformance of the Western Cape market relative to the national market and the robust growth in the prices of homes in the lower income price band.

“Notably, the continued migration of South Africans to the Western Cape is bolstering the housing market not only in the Cape Town metro but also in coastal towns from the West Coast through to the Garden Route, as well as in Wineland areas such as Stellenbosch, Somerset West and Paarl, resulting in a marked increase in activity in housing markets in these locations.

“The demand for property in Cape Town by those from other parts of South Africa is not new. It started more than 30 years ago. This demand in itself has contributed to the long term investment value in the Cape market which is mostly limited in supply, thus insulating, to some extent, this area from the fluctuations elsewhere in the country. So historically, one can expect good capital growth.”

The Cape’s international recognition and status as a destination has made it the focal point in the country – in fact, in Africa, and is now the city of choice for sporting events and international conferences, attracting participants and spectators from all over the country and continent. This has highlighted the lifestyle and everything that the Cape has to offer, drawing both wealth and skills to the province.

Furthermore, for investors, part time residents, migrants and retirees the Cape offers an exciting array of apartments at various prices and levels of luxury which allow luxury living, lock-up-and-leave living and excellent security.

The Study says the influx of South Africans to the Western Cape, coupled with the robust growth experienced along the KwaZulu-Natal North Coast in recent years and the more recent revival of buyer demand for the lower KZN South Coast, may also help to explain why the price of coastal properties, which normally underperform during periods of weak economic growth, remain unexpectedly resilient, retaining a small premium in terms of price growth over non-coastal properties since late 2014.

Another interesting trend is the sustained outperformance of sectional title properties, resulting from a growing number of first-time homeowners and an increased focus on affordability and convenience. The move to metro areas in order to reduce commuting times and the increasing number of affluent homeowners opting for luxury apartment living and renewed interest in property among investors also appear to be reinforcing this trend. 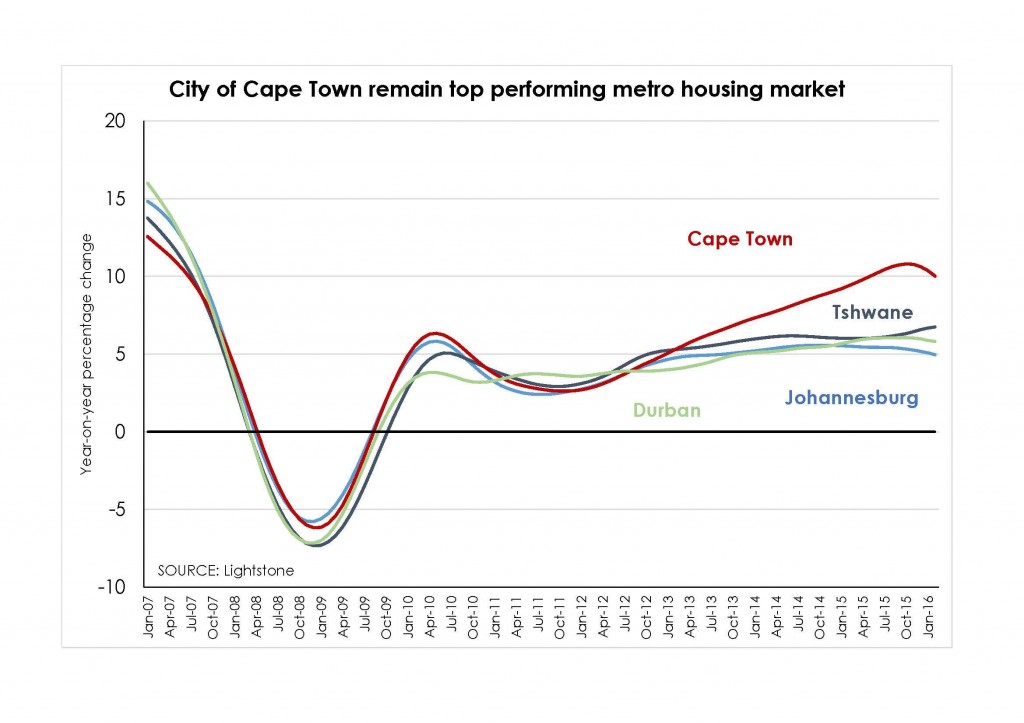 In recent months, there has been a marked increase in off-plan sales of newly-launched luxury apartment developments in areas like Melrose, uMhlanga and the Cape’s Atlantic Seaboard. It seems that after a five year long slump in the wake of the 2007/08 global financial crisis, development activity appears to be recovering, albeit mainly in the metropoles. Many of the recent luxury apartment sales are located in mixed-use nodes, which allow homeowners to enjoy a live-work-play lifestyle. 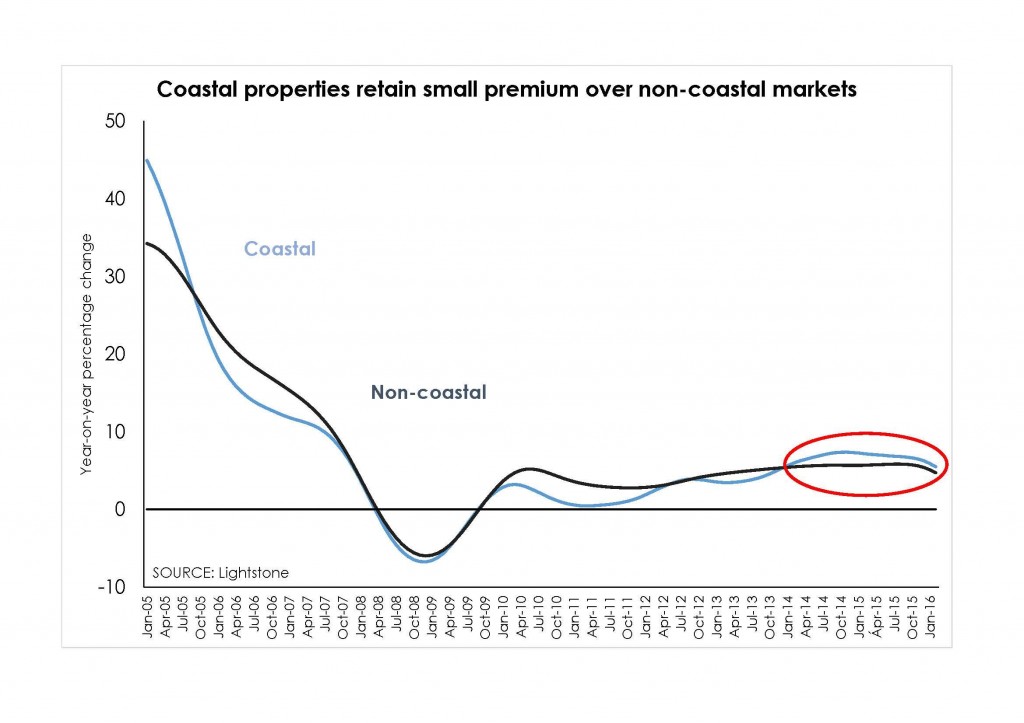 Affordability remains a critical issue in a weak economy, and at both a national and regional level, the lower price band below R1 million continues to register the strongest growth in house price inflation. At a national level, this category registered an average inflation rate of 9.4 percent during the first five months of the year, with regional averages ranging from 16.8 percent in the Western Cape to 8 percent in Gauteng. 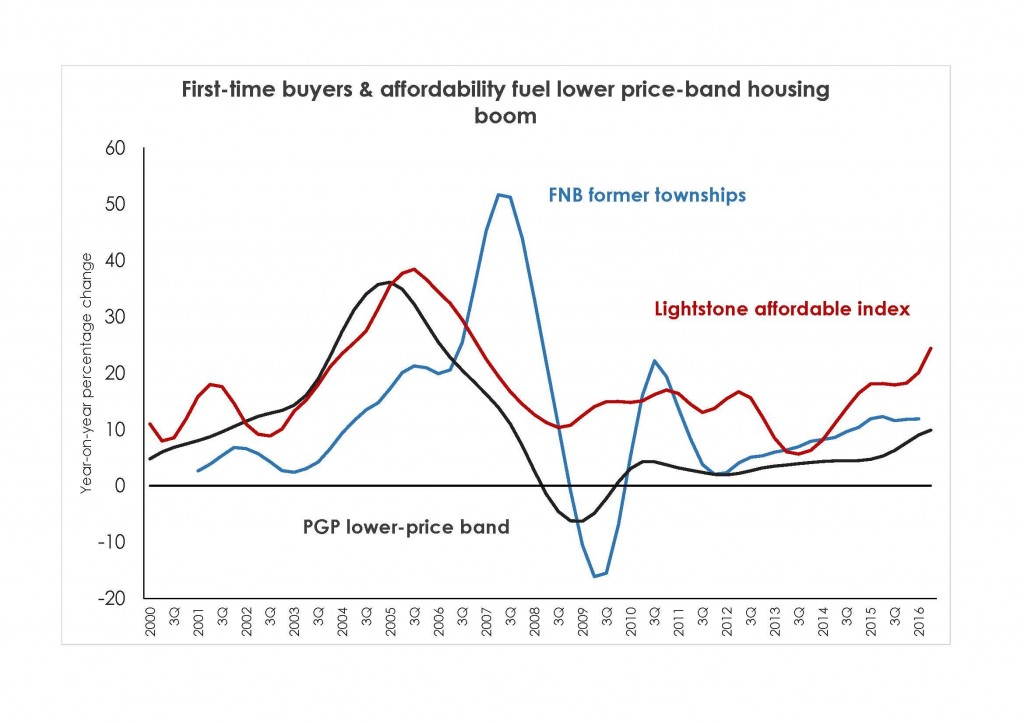 The outperformance of this segment of the housing market is attributable in part to South Africa’s relatively young population. According to ooba, South Africa’s largest bond originator, the average age of first-time property buyers in South Africa is 34 years, while the average purchase price for first-time buyers was R813 000 during the first five months of the year. 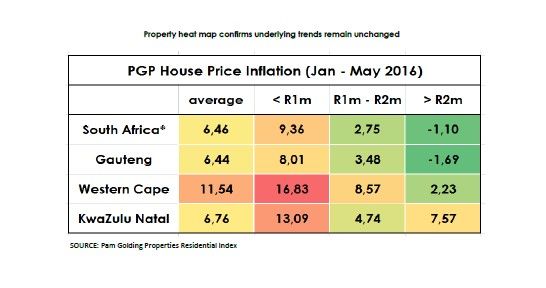 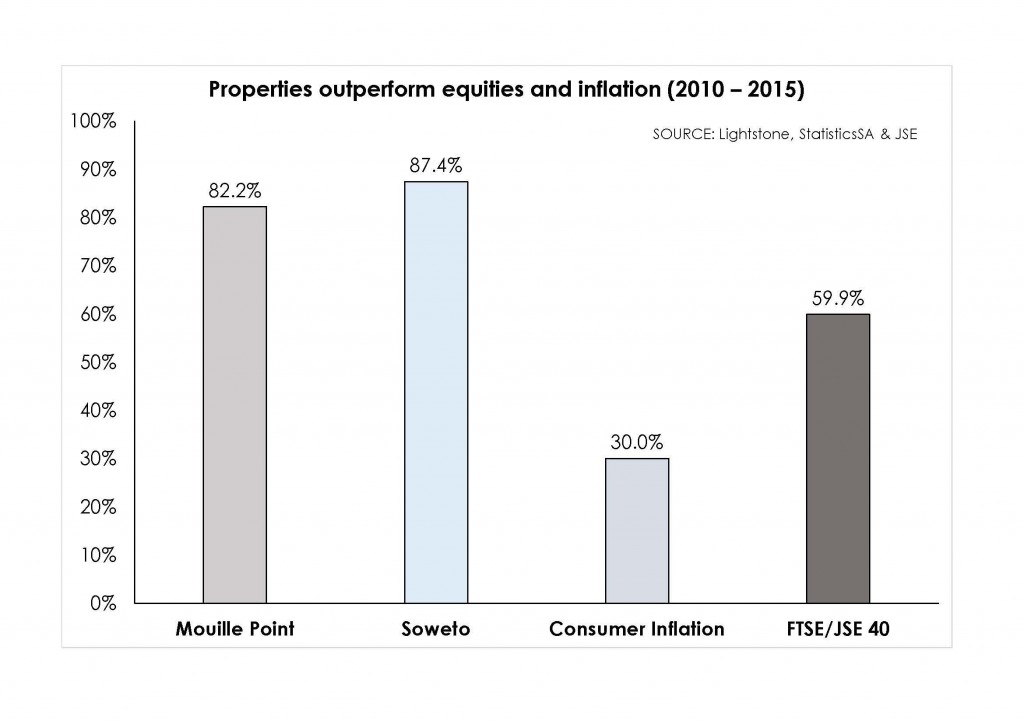 Adds Dr Golding: “Not surprisingly, property remains an investment asset of choice for South Africans. During periods of economic uncertainty and financial market volatility, individuals often become more cautious about their investments, often turning to more stable, ‘real’ assets like bricks and mortar. Research shows that a well-selected property can outperform inflation and generate a better return than equities.” 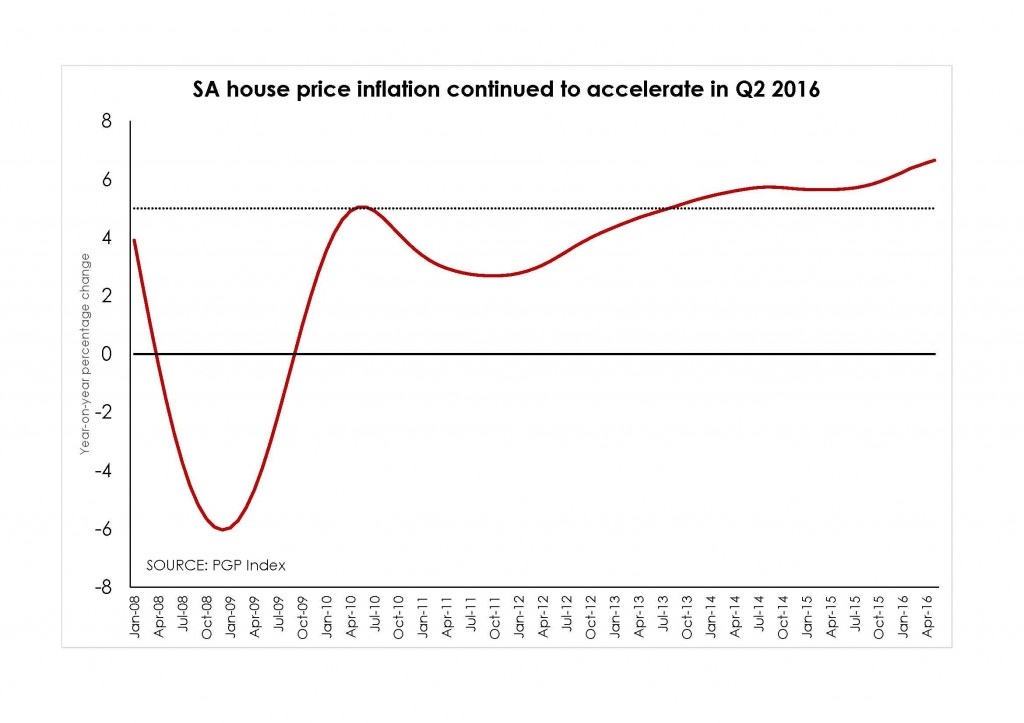 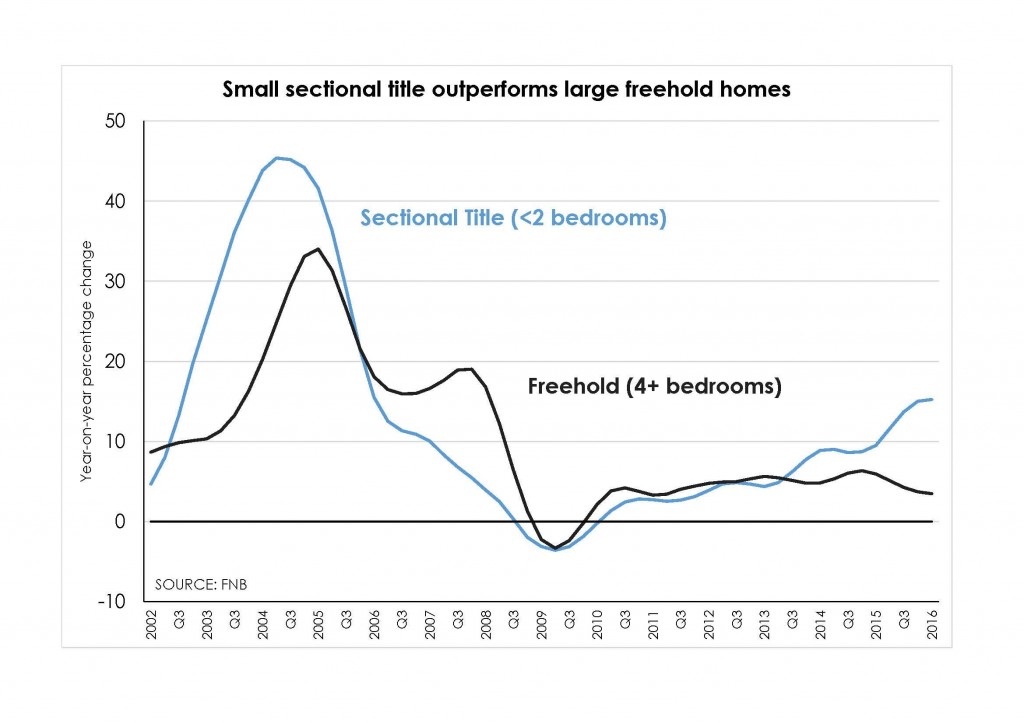 For example, over the past five years (2010 to 2015), the price of sectional title properties in Mouille Point rose by 79.4 percent (median price of R3.07m in 2015), comfortably exceeding the 30 percent increase in the consumer price index and the nearly 60 percent rise in the FTSE/JSE Top 40 Index during the same period. Encouragingly, this outperformance is not limited to the prestigious Atlantic Seaboard, with the price of a freehold property in Soweto increasing by 87.4 percent (median price of R371 000 in 2015) during the same five year period.

For a full copy of The Study go to: (page turner)

or contact Pam Golding Properties on 021 7101700 or email headoffice@pamgolding.co.za.