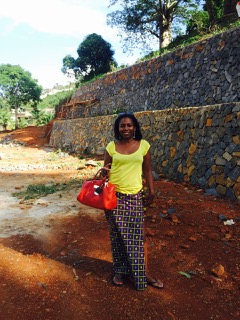 In Sierra Leone, fashion designer Jenneh Mason is best known for frocks and fashion shows. She also dreams of public playgrounds, lots of them, dotted all across the country bringing safe places to play for children who are unlikely to have ever seen one, imagined one or even understand the concept of safe play. She is halfway through her first – on a tricky waterside location in the capital city Freetown- and these days is much more preoccupied with the engineering requirements of retaining walls than the price of fabric.

With its beaches, mountains, rivers, lush rainforests and wide open spaces, Sierra Leone should be a paradise for all children. For most, it’s paradise lost. Only two out of three children will survive beyond the first five years of life. Of those half will be put to work before they are 14, many in the worst forms of child labour. They will grow up in a country with the world’s highest rate of TB, where 60% of people live in poverty, 70% of young people are unemployed or underemployed and 60% of adults cannot read or write.

Against a background of such urgent and evident human need, it can be hard to see playtime as a priority. As a consequence, Jenneh, who set up the Playground Foundation in 2014 to raise money, has learned to become a persuasive advocate for her vision. “My daughter first gave me the idea,” she explains. “We were out walking and she observed that children in Sierra Leone had nowhere to play. I turned and looked back down the road and realised she was right. Growing up in Sierra Leone, we played outside all the time, but Freetown has developed considerably since then. It’s heavily populated, congested and polluted. It’s a dense urban environment with big slum communities. There are no public playgrounds and playing out on the streets carries much more risk for today’s children than it did for my generation.”

Rapid urbanisation is common across all sub-Saharan Africa. In Sierra Leone it was aggravated by the 11-year civil war, which caused thousands of people to flee to the relative safety of Freetown. The civil war has long-since ended, but urban expansion continues and Sierra Leone’s cities are growing at almost twice the global rate as people move in search of work and other opportunities. The country’s population has also exploded. In 30 years it has doubled to just over seven million, and 42 percent of these are children, under 15 years old.

According to the Convention on the Rights of the Child, all these children have a right to play. Play makes a powerful contribution to their physical, emotional, social and intellectual development and Jenneh argues passionately that poverty should not deprive Sierra Leone’s children of that right.

“Children who live in poverty have an even greater need for safe play spaces. Play is something that can be emotionally and mentally protective. It can, to an extent, shield them from some of the negative aspects of poverty and allow them to build resilience to difficulties and uncertainties in their lives. It contributes towards their personal and social development, their physical and mental health, and ability to learn and engage with education.”

The advantages of play extend beyond the individual child. The links between play and cognitive and social development, which include improved memory, self-regulation, language, higher levels of school adjustment, increased literacy skills and other areas of academic learning, can considerably benefit families, communities and wider society. 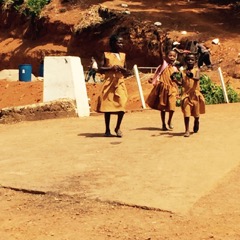 Playground Ideas is a non-profit organisation that supports individuals and groups building playgrounds. On its website and in a recent research report, it provides compelling evidence of child’s play and its economic value. In one study in Jamaica, the mothers of chronically malnourished toddlers living in poverty were encouraged and taught to interact and play with their children in ways that would develop their children’s cognitive and personality skills. Twenty years after the intervention these children had caught up educationally and economically with their less disadvantaged peers.

In the aftermath of the country’s Ebola epidemic and the commodities price crash, the Sierra Leone government has embarked upon an intensive recovery effort which is focusing on delivering key initiatives in seven priority sectors – education, energy, governance, health, private sector development, social protection and water. The pressures on the public purse are such that spending must be directed towards these necessities.

And so it falls to the generosity of private companies and individuals to deliver Freetown’s only public playground. The land has been donated by the church. Firms such as cement manufacturer LEOCEM and the Pan-African construction company CSE – are giving in kind. A close friend of Jenneh’s raised £1600 with a sponsored London to Paris bike ride and the Sierra Leone Football Association will be contributing a five-a-side football pitch. But there is still a £20,000 or so funding gap to be filled.

Play is as instinctive to children as breathing. Healthy children play every chance they get and it is easy for adults to become careless, if not slightly impatient of how important it is for them. But if its value to their health and development isn’t enough to loosen the philanthropic purse, then we should consider how rarely we see the children who don’t or can’t play. Too sick, too damaged, too difficult – they are literally and metaphorically imprisoned.

Jenneh Mason’s campaign to give all Sierra Leone’s children safe places to play isn’t a silver bullet for the country’s socio-economic woes, but it speaks most eloquently about the childhood we believe our children deserve and the stable and productive future we all hope to see for Sierra Leone.

Playground Ideas: http://www.playgroundideas.org/ is s an open-source hub of playground building resources and a global network of people and organizations creating time and space for play in their communities.