SWIFT data shows that banks around the world are reducing their correspondent banking relationships with a focus on perceived higher-risk jurisdictions, including Africa

Johannesburg, 24 August 2016 – SWIFT data released today shows that many countries in Africa have seen a reduction in the number of foreign counterparties, the overseas banks with which African banks transact. The data was part of a new report looking at the impact of global regulations on correspondent banking networks, called ‘Addressing the unintended consequences of de-risking – Focus on Africa’, which was released at the SWIFT Business Forum South Africa, in Johannesburg.

Correspondent banking enables banks to access products and services that might otherwise be unavailable, while enabling cross-border transactions and access to overseas products and markets. Increasingly, as banks globally respond to new regulatory requirements they are reviewing and rationalising their correspondent banking relationships in jurisdictions where they believe there is greater risk. This is known as de-risking.

“Correspondent banking plays a critical role in the global payments landscape,” said Hugo Smit, Head of Sub Sahara Africa, SWIFT. “The increase in de-risking in Africa could therefore have damaging consequences across the region. SWIFT’s new report illustrates the extent of de-risking in Africa and elsewhere, and aims to support the industry in addressing this growing challenge.”

The report shows that de-risking is on the rise in several African countries. South Africa lost more than 10% of its foreign counterparties between 2013 and 2015. In Angola the decline was even steeper, with the number of foreign counterparties dropping by 37% in two years. Mauritius has also seen a sharp decline of 18%.

The data shows that Nigeria’s international banking network has experienced limited de-risking. However, local banks have at the same time been cutting their own relationships with other African banks and financial services providers perceived to be risky, such as bureau de change and money transmission companies.

The report looks at some of the potential consequences for the affected countries. These include a significant impact on cross-border trade if countries are cut off from the global financial system. This could lead to issues with the supply chain.

“De-risking creates problems along the supply chain, making it difficult to import and export goods.

This will have a direct impact on levels of poverty and unemployment,” says Pattison Boleigha, Chief Conduct and Compliance Officer at Access Bank.

There could also be difficulty in accessing some products and services such as international wire transfers, cash management services and trade finance. If traditional banking channels are no longer available, transactions are likely to be forced into alternative channels, which may be less well regulated. 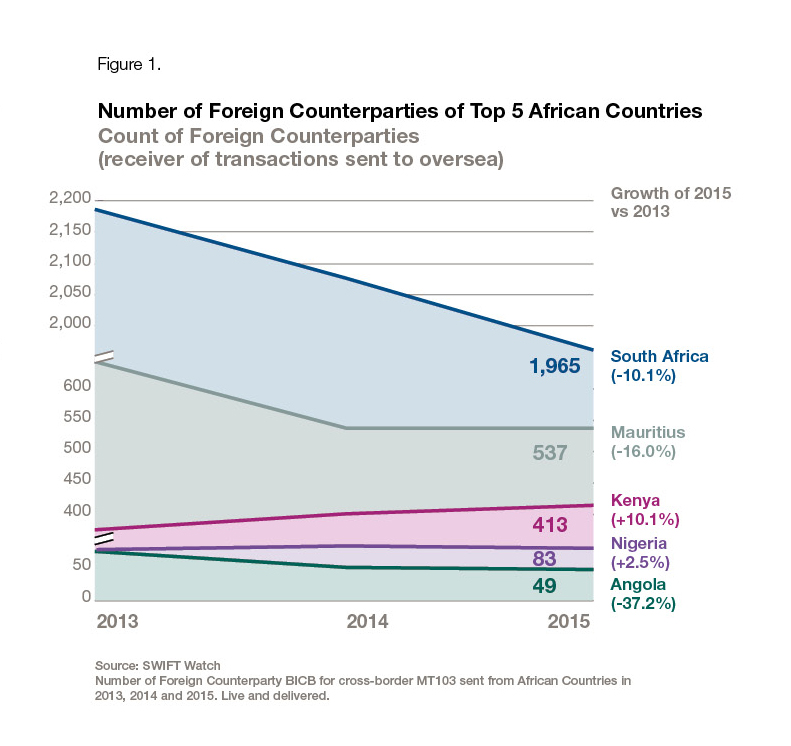 “We could see serious funding gaps emerging, exacerbating an already fragile situation in most markets, says Bleming Nekati, Chief Trade Finance Officer at the African Development Bank. “This will negatively affect the viability of projects and have the effect of slowing down the development drive in Africa. In addition, the increased costs of funds will inevitably be passed on to the end borrowers.”

Additionally, de-risking could have a negative impact on financial inclusion rates on a continent where huge proportions of the population are unbanked. Typically it is the smaller, local banks that are de-risked; those that are providing services to local communities. Therefore de-risking could adversely impact the services available to the poorest in society.

SWIFT’s report aims to support the industry in overcoming the challenges of de-risking. Smit said: “Banks need to understand the circumstances that lead to de-risking if they want to prevent it from happening to them. Factors include the political and economic landscape in specific African countries, however, transparency over activities, business lines and behaviour is also critical. Data utilities such as SWIFT’s KYC Registry for example can contribute to increasing transparency, reducing costs and sharing information in an efficient and standardised way.”

Other steps that banks can take to improve the transparency and consistency of their information include:

Creation of a specific individual or department to create a gold standard data set, the so-called ‘golden copy’. This data set can then be sliced and diced before being shared with the market in different ways.

Compliance controls such as transaction screening.

Reduction in due diligence costs incurred by correspondents.

You can find the full report https://www.swift.com/node/3512.