Analysis of International air travel to Africa this year (January to August) by ForwardKeys, a company that predicts future travel patterns by crunching and analysing 14m booking transactions a day, reveals growth of 5.4% compared with the same period last year.

However, there is a tale of two Africas – North Africa, including Algeria, Egypt, Morocco and Tunisia, which has seen little growth or even a decline, and other parts of Africa, particularly East Africa, which has displayed double digit growth.

Olivier Jager, CEO, ForwardKeys, said: “Despite their weak growth, North African countries still made it into the top 10 destinations in terms of volume of traffic but they have suffered from political instability and terror activities in the region.”

In terms of market share, South Africa is the largest destination, with 13% of international air traffic; it is followed by Egypt with 9%, Morocco with 8%, Mauritius with 5%, Kenya, Algeria and Tunisia with 4%, Tanzania and Ethiopia with 3% and Nigeria with 2%. 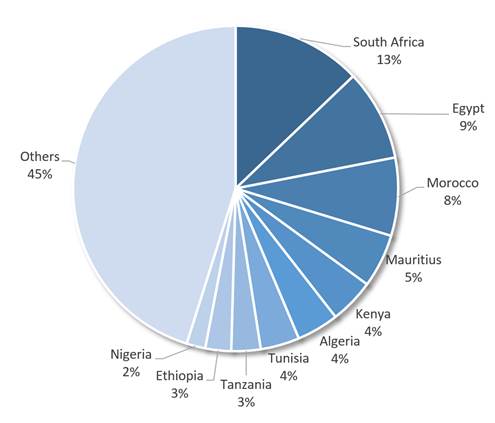 When one looks at origin markets, Europe is the dominant force, providing 46.1% of air traffic to Africa, which has grown by 2.5% this year.  However the other origin markets have shown much stronger growth with the Americas up 12.7%, Asia Pacific up 12.4%, the Middle East up 9.6% and travel within Africa up 5.4%.

Looking ahead to the remainder of the year, the picture is highly encouraging.  International bookings for travel to Africa as a whole, up to the end of December are 11.1% ahead of where they were at this time last year.  Europe, which is the origin of over 60% of forward bookings is 11.3% ahead.  Asia Pacific is 14.3% ahead, the Americas 12.5% ahead, the Middle East 6% ahead and travel within Africa 9.4% ahead.

The data has been released ahead of AviaDev, a new airline route development conference and AHIF, Africa’s highest profile hotel investment conference, which run concurrently at the Radisson Blu Hotel & Convention Centre in Kigali from 4-6 October 2016.

Jonathan Worsley, Chairman of Bench Events, which is organising AHIF and AviaDev, said: “This is extremely interesting and timely data. It explains why we are seeing very serious interest in the market – over twenty airlines have signed up for this inaugural event to discuss new aviation routes in Africa and a scores of very senior executives, including the Global CEOs of the Rezidor Hotel Group, Marriott and Westmont, are also coming to Rwanda.”

Arne Sorensen, President & CEO, Marriott, whose new hotel in Kigali will host the conferences’ opening reception concluded: “AHIF has been fundamental in helping us meet local contacts and boost our profile in the African market.”

Full details, including the programme and speaker line-up can be found at www.Africa-Conference.com.