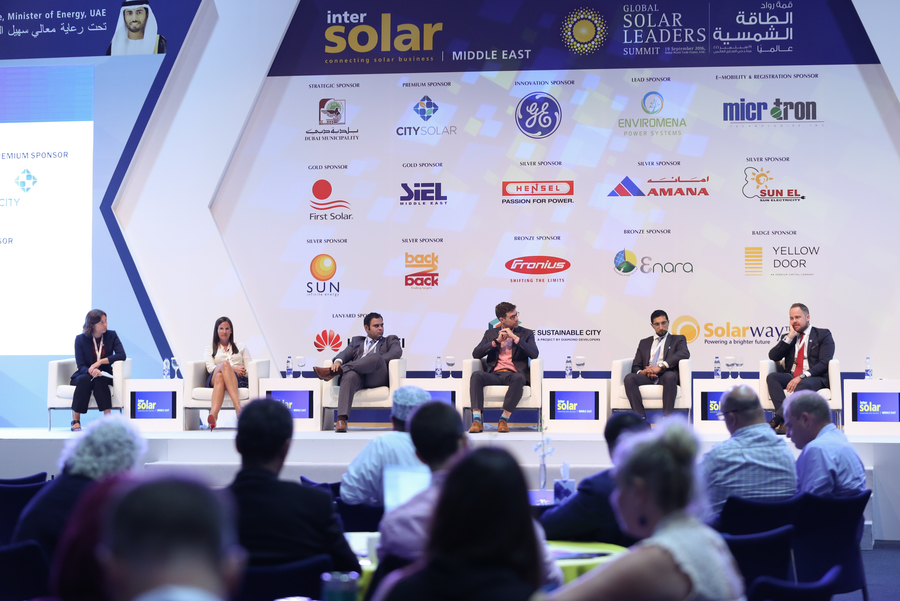 In many of the sun-blessed countries in the Middle East, solar energy generation is at the top of the energy agenda. The Intersolar Middle East conference 2017 in Dubai (United Arab Emirates) pays tribute to this fact. Information on current market trends and framework conditions of the industry, and opportunities and risks of market entry awaits participants, as well as the chance to make contact with key players which are crucial for expanding business relationships in the region. In a comprehensive program held on September 26 and 27 at the Conrad Dubai Hotel, the specialist conference is set to build on the success story of the Intersolar Middle East exhibition 2016.

Continuing on from the successful exhibition 2016

Sunny regions attract the solar industry – which is certainly the case in the Middle East and North Africa. At around 3 euro cents per kilowatt hour, solar power is now the most cost-efficient form of power generation in the region. Intersolar and its MENA events have a long tradition of providing a platform for market participants where solar energy generation is in the spotlight. Attended by over 4,000 trade visitors and around 100 exhibitors, the first ever Intersolar Middle East exhibition and accompanying conference, held in 2016, was a resounding success. In previous years, Intersolar had organized one-day conferences in the Middle East in locations including Riyadh and Dubai. This year, a side event at the Intersolar Europe held in Munich on June 1, will mark the start of the MENA series, primarily addressing financing options and current market developments.

The Intersolar Middle East event in 2017 in Dubai will predominantly take the form of a conference. Following conversations with disseminators and companies, the Intersolar organizers decided to focus on providing a top-level conference program and networking opportunities for Intersolar Middle East 2017. Sessions exploring the development of different markets and technologies, discussions between investors, project developers and key players in the region, information sharing, and not to mention a wide range of different networking opportunities, will give each participant a wealth of opportunities to expand their knowledge and make new contacts.

“The solar market is booming in the GCC states and further afield. We wanted to provide the industry with a professional platform, and thus Intersolar Middle East was born,” explains Marcus Elsässer, founder and CEO of Solar Promotion International GmbH. “In the medium term, the MENA states will account for a considerable proportion of the solar energy generated. At our events, we highlight a range of prospects for international companies, enabling them to participate in this development.” A top-level conference such as Intersolar Middle East provides entrepreneurs from the solar industry with the ideal opportunity to find out about the solar markets around the Persian Gulf and to network. The Intersolar organizers will be working together with long-standing partners, including MESIA (MENA), Günder (Turkey), BSW-Solar and EUPD (both in Germany), giz (Pakistan/Afghanistan) and many others to prepare an exciting and extensive two-day program.