Africa is judiciously positioned to be the next big mobile market, enviously eyed by global investors for her enormous growth opportunities. 2019 is undeniably the year to prioritize investments in Africa’s mobile market, to leverage this monetary opportunity.

The Mobile Economy contributed USD 110 billion to Africa’s GDP (7% of the total GDP) in 2017 and is expected to generate more than $150 billion (approximately 7.9% of GDP) by 2022. The mobile technologies and services industry further supported 3 million jobs in 2017. 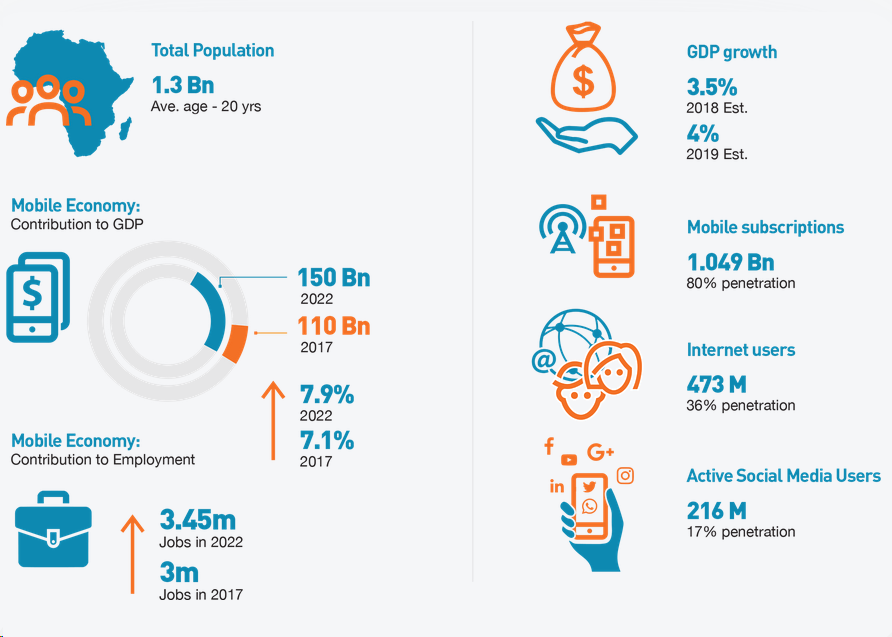 A growing population of 1.28 billion people (42% of which are in cities), a snowballing middle class expected to reach 1.1 billion out of the 2.5 billion Africans by 2050 – leading to a higher purchasing power – are among the considerations for Africa’s mobile explosion.

Other factors that have driven much of Africa’s growth in mobile subscriptions include more affordable smartphones, declining mobile data plans, the efficiency brought about by smartphones including online shopping/purchases, mobile payments as well as searching for information.

Nevertheless, the growth of mobile will remain uneven, as the 54 African countries record varying performances, both in their respective mobile markets and the entire economies.

Booming number of smartphones in Africa

In 2018, Africa had 255 million smartphone connections, which is equivalent to 36% of the total population. This is against a 444 million mobile subscriber base in the continent by 2017. By 2025, there are expected to be approximately 690 million smartphones in Sub-Saharan Africa, equating to a connection of about 66%. 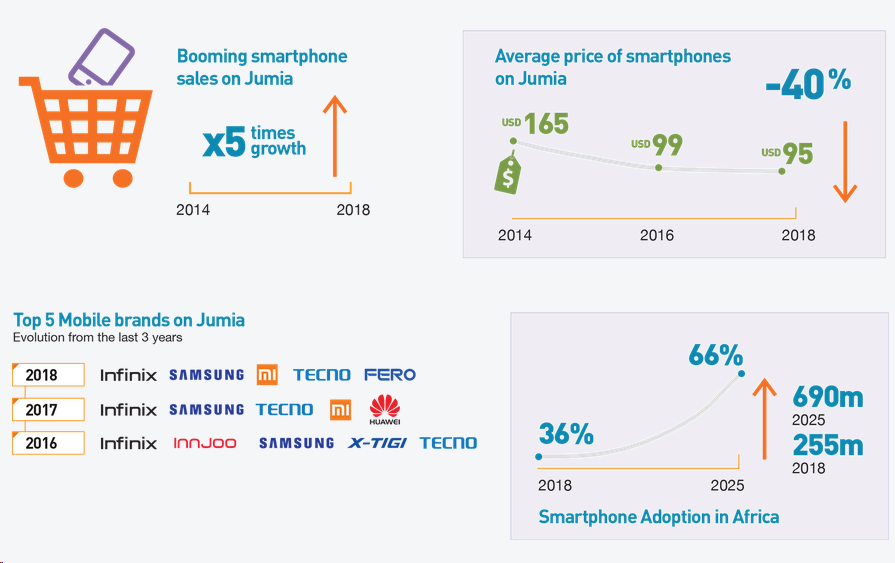 Although affordability of the smartphone has been quoted as a major challenge for a part of the population, Jumia – Africa’s leading e-commerce platform – has reported a decreasing average price of smartphones over the last three years. The average amount spent to purchase a smartphone on the platform in 2016 stood at 99 USD, which reduced to 96 USD in 2017 and 95 USD in 2018 respectively.

However, the rise of affordable entry-level devices from price-focused brands remain a key driver of smartphone adoption in Africa. Among the top mobile brands on Jumia in 2018 included Infinix (which has been thee top brand for the last three years), Samsung, Xiaomi, Tecno and Fero.

Besides, while affordability of mobile data in Africa is improving across the board, the cost remains high, with the price of 1GB averaging around 8.76% relative to monthly income in 2017.