Art serves many different functions. Entertainment. It makes people think for a moment. To thrill. Or to say absolutely nothing. Yes, this is also important. Just as friends go to a party, drink together, and start saying nothing of importance.

In Brazil today, the people recognized that the “driving force” behind making art has been sabotaged. Freedom of creation has been curtailed as a barbed wire fence. The state and its dirigisme want to control the narratives of the general public.

Nothing much is different in these times of young democracy, either on the left or right side. If the self-revered “progressive” side took years to include in its rhetoric, the word “diversity” is a sign that its praxis was not so different from the conservative side.

A good example of the distortion of the Social Function of Art was the action of the National Cinema Agency -ANCINE, a government agency, who ordered the removal of posters  from its walls.

Instead of stimulating the growth of the industry and preserve the history of Brazilian cinema, the Agency goes against the future.

Productions that address the black, indigenous world that speaks on LGBTQI+ community do not have the chance to receive financial contributions. The following year, ANCINE acknowledged that no black woman directed a film in 2016, and that black men occupy 2,1% in film credits and, through Jair Bolsonaro’s “filter”, promised to leave Brazilian cinematography of its time as your face. Ugly and false.

Culture comes to Brasilia and will have a filter, yes. It is a federal agency. If it cannot have a filter, we will extinguish Ancine. We will privatize or extinguish. Public money can’t be used to make pornographic film.

Jair Bolsonaro referred to the feature film Bruna Surfistinha. This movie was about the life of a call girl. Bolsonaro does not consider that the film was watched by two million people in the cinema, generating income, and other millions who watched on TV. Five hundred people were directly employed. The film was awarded by the Brazilian Academy of Cinema and generated revenue for the Federal Governments.

Irresponsible and authoritarian statement. The Constitution ensures the free expression of intellectual and artistic activity (Article 5). This is a great movie, which does not glamorize or stigmatize prostitution. This film had a significant result: more than two million tickets sold. RioFilme invested R$ 750 thousand in this project in 2011 and earned R$ 1.1 million only in the cinema window. It is a case of artistic and commercial success of Brazilian cinema. I am proud to have contributed to its achievement. A significant film that should be recognized and valued. The investment in Bruna Surfistinha is justified from the point of view of cultural and artistic development as well as from the point of view of economic development. There were relevant results in both items. All the developed countries of the planet invest in audiovisual!

Jair Bolsonaro has promised since his campaign a “policialesco” state in Brazil. This air of fear generated through violence is a good opportunity to watch the police thriller A Divisão (The Division)[3]. It is a parallel in those days where the Social Function of Art is questioned, either from the artistic or commercial point of view. I hope Bolsonaro watches this movie whose series is now available on demand on Globoplay. Critics point to one of the top five films screened at the twenty- first Festival do Rio, being the only Brazilian production:

The Secretariat of Security and the civil police decided to create an anti-kidnapping division. The Interesting is that the film shows that the members of this police group aren’t totally good nor bad, making the characters more three-dimensional.

Throughout Rio Festival, the tone was critical to Brazilian government. Actress Mariana Ximenes performed at the opening of the Rio Festival in a dress[4] printed with various posters of national cinema. It was a clear protest against ANCINE’s decision to remove the posters from its walls.

During the premiere of The Division, director Vicente Amorim said on stage at Cine Odeon: “Making cinema is hard work. It takes a lot of work. And tramp… It’s who wants to stifle the culture in Brazil.”

I acted in this movie. I was part of Serginho’s team. This is an actor’s film. The looks speak much more than the dialogue. Also note the critics:

We should highlight the photograph signed by Gustavo Hadba, which shows a Rio de Janeiro in a different way where the city never is solar and the sky never is blue, giving a more distressing aspect. 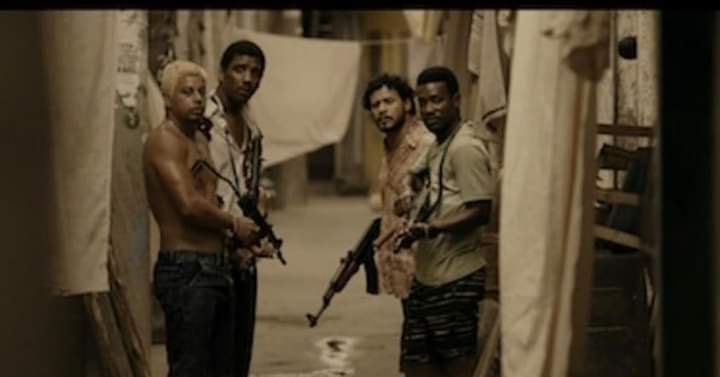 AfroReggae Audiovisual is a new film production company that maintains the same principles as its famous NGO founded in the Vigário Geral slum. “It was no by accident that the doctor in the series is black. In much of the Brazilian audiovisual the black is slave, employed. Whatever AfroReggae does, black is the protagonist. Ever. It’s our brand,” said José Júnior, creator of AfroReggae.

It is impossible to speak about Social Function of Art in a country like Brazil of 54% where its population of black African descent and the black artists and technicians do not figure in cultural productions.

The AfroReggae NGO has been effectuating the best sense of social transformation[5] that is to rescue young people from drug trafficking and to integrate into society through art and culture. Opportunity is necessary. As actress Viola Davis said in her powerful 2015 Emmy speech, “The only thing that separates women from color from anyone else is opportunity.” In this sense, actress Cinara Leal draws attention to an important factor:

This work is of great importance in my life. Not only for reverberating and empowering other women, my black race, but precisely for uniting, for awakening society as a whole. For this role, I brought my experience as a black woman, which is not easy. We know that it is not easy in the society that we live. Different everyone here, I could have gone to crime. Art saved me

Art saves. Art was born of the hope of salvation. Art is also ancestry. And transcendence.

Art was born[6] in ancient Egypt (known as Kemet: land of black people) and as Joshua J. Mark says in his article ‘Ancient Egyptian Art “art was functional and created for a practical purpose” since  (c. 6000 – c. 3150 BCE). Although today the Art can has been to appropriate by  western art market.

Paulo Mileno is an actor, writer, editorial advisior of the Africa and Africanities Magazine and researcher in the Nucleus of African Philosophy at the State University of Rio de Janeiro, Brazil. He can be reached at pmileno@gmail.com.

The AfroReggae Cultural Group: A Rebirth Of Hope Within Rio De Janeiro’s Favelas