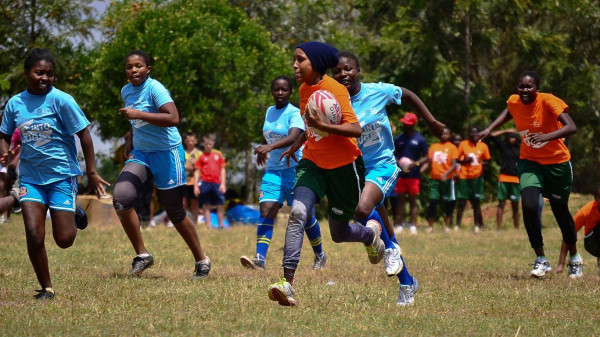 Tapping into the burgeoning talent of the youngest region of the world, Rugby Africa (www.RugbyAfrique.com) is excelling at continuing to bring development programmes to Africa as they spearhead the World Rugby’s Get Into Rugby Programme with the Official Partner of Get Into Rugby in Africa being Société Générale.

A central part of their ongoing strategy to grow the game around the world, Get Into Rugby is a programme that enables unions and regions to increase the number of players, coaches and referees entering the game. It also promotes the values of the game and allows boys and girls to enjoy playing for the first time in a safe, environment, in line with the principles of World Rugby's Charter for Rugby.

With the fastest growing population and youngest population, Africa is ripe for this mass participation programme. Keen to harness the potential of African youth to grow rugby’s numbers and popularity, Rugby Africa has done consistently well since the inception of the programme by introducing rugby to 500 000 children every year and touching 3.5 million children’s lives.

Commenting on the success of the programme to date, Development Officer in charge of Participation Programmes at Rugby Africa, Mostafa Jelti said: “Today, 36 unions are registered and participate actively in the Get Into Rugby project. 316,300 new players have been registered all over Africa since January 1st, 2018. 46 % of these players are girls. In addition to that, 4 700 trainers, teachers and referees were trained in Africa, among others by Regional Development Officers since the beginning of 2018. It has also opened the doors of schools in several countries where rugby is now part of the curriculum.”

Cognisant of COVID-19 and how that would have affected the programme, Jelti remarked that following the outbreak of the COVID-19, governments across the continent imposed a ban on sports activities to minimise the spread of the disease. Consequently, unions had to stop the Get Into Rugby activities. However, as governments continue to relax COVID -19 restrictions, most unions are progressively implementing return to play protocols.

“World Rugby is currently reviewing the Get Into Rugby strategy to align it with World Rugby’s new participation plan. The webinar also focused on managing a mass participation programme amid the unique challenges experienced in Africa. Secondly, the webinar dealt with the topic of Long-Term Player Development with particular attention on skill progression through game- based coaching.”

Jelti said that future online sessions will focus on:

Speaking about the overall strategy for the growth of the game Community Rugby President at Rugby Africa and member of the Community Rugby Committee at World Rugby, Rolande Boro said, in line with World Rugby’s updated strategy for the programme, Rugby Africa will look at helping unions to create a pathway from grassroot levels to senior levels and bridge the gap between participation at a young age and active playing at club level.

Alluding to Africa’s challenges including availability of resources and the perceptions communities and parents have about rugby, Boro said that the first step was to make the programme attractive by allowing all children access, not just the a few privileged.

“By allowing all children access, we ensure that sessions are fun, turning values into virtues  through storytelling, healthy eating and addressing the physical, social, and emotional welfare of the children. Secondly, availability of resources could be addressed with a school approach,  utilising teachers, and volunteers as coaches,  linking resources to coaches rather than schools    and teams, and making use of the game-based approach in coaching.”

She added that beyond participation, Rugby Africa wants to grow the number of players and thus transform mere participants into players. Get Into Rugby also helps raise the popularity of the game, getting more people to know about rugby, follow rugby and become fans or get involved   as coaches, first aiders or administrators.

In addition, Rugby  Africa  has  engaged  Regional  Development  Officers  who  assist  unions by offering technical and administrative support. They also organise and coordinate the support coming from partners such as World Rugby and Société Générale who have been very helpful with donating 1 000 balls to unions, where Societé Générale has a presence.

For more information log onto – Get Into Rugby – Rugby Afrique (www.RugbyAfrique.com/get-into-rugby)