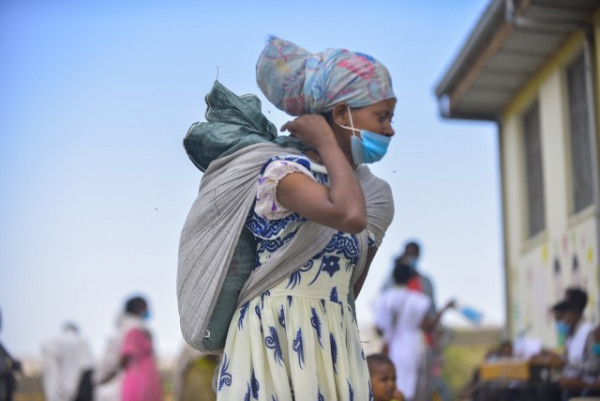 The ongoing conflict in Tigray has led to a humanitarian crisis characterized by alarmingly high levels of food insecurity, gender-based violence, widespread displacement, limited access to services, and the destruction of the local economy.

The conflict commenced at the peak of the main agricultural season (Meher) harvest period when many households had not yet harvested their crops. It is estimated that over 90 percent of the crop harvest was lost (looted, burned and/or destroyed), while 15 percent of the region’s 17 million livestock were reported looted or slaughtered. Given that the majority of Tigrayans depend on subsistence agriculture (80 percent rely on agriculture as their main source of food and livelihood), the loss of their harvest and production inputs has severely impacted their food security and nutrition.

As of June 2021, about 5.5 million people in Tigray and neighbouring Afar and Amhara are in high acute food insecurity, representing nearly 61 percent of the analyzed population. A total of 353 000 people are in Catastrophe level of acute food insecurity (Integrated Food Security Phase Classification [IPC] Phase 5) in Tigray alone, the highest numbers recorded in the last decade. There are approximately 2.1 million people in Phase 4 (Emergency) and 3.1 million in Phase 3 (Crisis), a large number of whom, if supported with agricultural inputs, would avoid falling into IPC Phase 5 and destitution.

Nearly 93 percent of the population in northern Ethiopia requires emergency assistance (more than 5.5 million people). After failing to harvest in 2020, the consequences of missing the 2021 season may be dire, as most households depend on their own production for food and income. If support is not provided immediately, the next harvest will be in 18 months. This scenario has far-reaching food security and nutrition consequences.

Prior to the conflict, the food system (production, transportation, processing, packaging, storage, retail, consumption, loss and waste) fed and supported the livelihoods of a vast majority of Tigray’s population. Even though households in Tigray were repeatedly exposed to multiple shocks, such as drought, desert locust infestations and the recent coronavirus disease 2019 (COVID-19) pandemic, most of them were able to cope, as demonstrated by the results of various food security assessments.

Thanks to a contribution of USD 500 000 from the Government of Belgium through SFERA, FAO is implementing a project that will directly benefit 11 000 households (55 000 people). Beneficiaries will be provided with assorted agricultural inputs (short-cycle/drought-tolerant seeds including onion, teff and tomato) and trainings on good agronomic practices. Additionally, the project will support coordination efforts at the regional level to improve the collection and dissemination of information on agricultural interventions by Disaster Risk Management – Agriculture Task Force partners to enhance their planning and targeting.

The project will be implemented in collaboration with a wide range of stakeholders, including government, United Nations agencies, non-governmental organizations and the private sector.