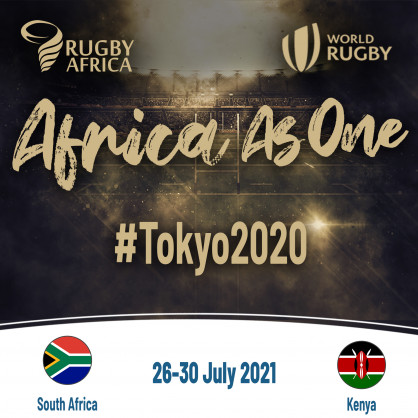 With the Tokyo Olympics rugby sevens competition underway from today until 31st July at the Tokyo Stadium, Rugby Africa (www.RugbyAfrique.com) is fully supporting and wishing well the South African and Kenyan teams who qualified for the Olympics.

South Africa, bronze medallists in Rio, and USA are in Pool C having both achieved direct Olympic qualification by finishing in the top four of the HSBC World Rugby Sevens Series 2019, where the USA Eagles finished runners-up after reaching the medal podium in seven of the 10 Series rounds.

Joining them are Kenya, who qualified in 2019 courtesy of their first Rugby Africa men’s sevens title since 2015, and Olympic debutants Ireland, who secured the final spot thanks to a thrilling 28-19 victory over France in the World Rugby Sevens Repechage in Monaco earlier this month.

The Lionesses from Kenya will compete in their second Olympic Games after finishing runners-up to South Africa in the Rugby Africa Women's Sevens Championship in Monastir, Tunisia last year.

Speaking about the three African teams competing, President of Rugby Africa, Khaled Babbou, emphasised Rugby Africa’s commitment to delivering teams from their preparation games, all the way to international fixtures such as the Olympic Games.

“Through the leadership of Rugby Africa, African teams came together to prepare the qualified teams for the Olympic Games and Olympic Repechage, with friendly tournaments and shared preparation camps. Despite COVID-19, teams stood in solidarity and shared experiences and learnings from one another. We wish all three teams well in their battles on field and we will be encouraging and supporting them from the sidelines.”

Excited about the Lionesses, Rugby Women’s Advisory Committee President, Paula Lanco, said that the exceptionally hard work shown by the Kenyan women’s team was remarkable and their place in the Olympics was well deserved.

“The team has worked exceptionally hard to achieve a high level of fitness and endurance. They learnt from their successes and lessons of the past and it held them in good stead. They certainly reflect the vision of Kenyan rugby, and we wish them well at the Tokyo Olympics.”

Kenya women’s rugby sevens captain Philadelphia Olando said that the team were in prime physical and mental condition for Tokyo 2020.

“We have every intention of flying the flag of Kenya high and putting Africa on the world map.  We are absolutely boosted thanks to coach Felix Oloo who created a fitness plan for every member of the squad, while no team training was allowed during lockdown. While the Olympics may have been postponed in 2020, it only gave us more time to prepare for the tournament.”

Andrew Amonde who will captain the Kenya Men’s Sevens national team -Shujaa – said that he was happy to have a team with experienced and fit players.

“It is such a privilege to have the likes of South Africa and the Lionesses as part of this journey to the Olympics. We as a team are ready to support our African brothers and sisters and encourage each other during our time in Tokyo. The Shujaas are ready to set the standard of African rugby.”

South African Rugby Sevens coach, Neil Powell, said they are excited to be flying not only the South African, but African flag as well. “This is the biggest stage in the biggest sporting event you can find, so to be able to represent our continent, alongside Kenya, will be massive for us. The two of us will both be gunning for that gold medal no doubt. We feel we have unfinished business after our bronze medal in Rio, while Kenya has shown their ability to beat anyone on many occasions before. As luck would have it, we are in the same pool, but that will motivate both squads. The USA and Ireland are standing in the way of both African teams making the top eight, so we have our fate in our hands.”

Kenyan Rugby union was thrilled that they had both their men and women representing the country in Asia.

“Our teams have shown resilience and shown the world that they are both forces to be reckoned with. We are pleased to represent Africa with both our teams carrying the hopes of Kenyans and Africans alike.”