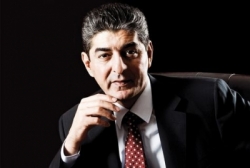 Recognizing immense standing in the construction and real estate sector, Dr. Naseer Homoud, a renowned philanthropist and business leader, has been placed at 84th position of 100 Most Powerful in Gulf Construction as unveiled by Construction Week’s annual Power 100 listing.

Dr. Homoud was recently ranked at 53rd position among the 500 most powerful Arabs from the globe. The list, better known as the Arabian Business Power List features Arabs living in 37 different countries, and working in every sector from business and media, to sports, science and entertainment.

Having moved Qatar to expand his dentistry services in 2001, Dr. Homoud quickly moved into other sectors. He set up The Wall for Investment & Real Estate Development in 2002. The Wall quickly transformed into a real estate empire spanning many countries in the region.

The Wall offers most diversified products comprising residential, commercial/IT parks, retail, hotels, amusement parks and Special Economic Zones. Having started the journey in a modest way, The Wall is now establishing new standards in the industry. While development of residential projects and integrated townships including low housing projects in several countries of Middle East are primary focus areas, the Wall is also working on various aspects of real estate development, such as land identification and acquisition, project planning, designing, marketing and execution.

Born in Irdib town of northern Jordan and brought up in a family that greatly values human brotherhood and sense of sacrifice, Dr. Homoud has been actively contributing to various philanthropic causes as well.

Philanthropy is close his heart. He believes that life and wealth are bounties of Allah, in the nature of a sacred trust, that should utilized for the sake of good.

Dr. Homoud says, “We must share these bounties of Allah with the people who need them most. This is what Allah has ordained us. Help comes to those who help others in their hour of need.”

He got involved in charitable and philanthropic works early. His services were well recognised. Late Jordanian King Hussein bin Talal honoured him, in 1997, for medical services to orphans.

He was regional director of Intergovernmental Institution for the use of Micro-algae Spirulina Against Malnutrition (IIMSAM). Dr. Homoud also contributed in planting of one of the most important forests in Jordan that was destroyed by fire.

Dr. Homoud is supporting many programmes aimed at helping orphans, disabled, elderly, women and homeless in his home country.

Dr. Homoud believes that educational advancement is the key to success. His involvement in supporting students ranges from distribution of school bags to poor students to providing university scholarships.

Sports is yet another area of interest for Dr. Homoud. He has been supporting many athletes in his country who have performed excellent in international and regional event. He believes that such sportspersons are the best ambassador of the Kingdom of Jordan.

Dr. Homoud has also assisted people of Gaza Strip, and victims of natural calamities in Japan, Haiti and many regions of Africa.

Successes and recognitions, one after another, have further enforced humility in him. “My friends and associates are my assets and my success is a bounty by Almighty Allah,” says Dr. Homoud.