Ethiopia, the second most populated nation offers a wide range of great organic and healthy cuisines. In fact, it is often described as the land of bread, honey, and grains which make up the  diet of its people. The long history of the country influenced by over 80 ethnic groups resulted in a culinary variety of blended indigenous ingredients. The dishes consist of vegetables and meat served in a form of thick stew. The country has its own unique breakfast, lunch and dinner yummy specialties. 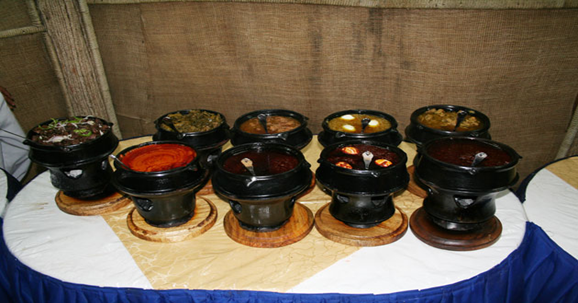 Ethiopian cooking uses a rich array of edible oil and butter. Preparation of the stew begins with a large amount of chopped red onions sautéed in a clay or steel pot. Berbere or turmeric is added to the sautéed onions for a stronger flavour. The milder stew called alecha uses turmeric instead of chili. After the long process of seasoning, the stew (wet) can be finished with meat, fish, potatoes and other legumes.

With more than 25 spicy indigenous stews,  Ethiopia offers a lot for all travelers and tourists. All stew is served with injera (large round flat bread) made out of fermented teff flour which is highly nutritious. The gluten-free grain which forms the centerpiece of meals packs calcium, protein and amino acids. Portions of stew are piled on top of the bread allowing the injera to soak up the juices creating a mouthwatering combination. 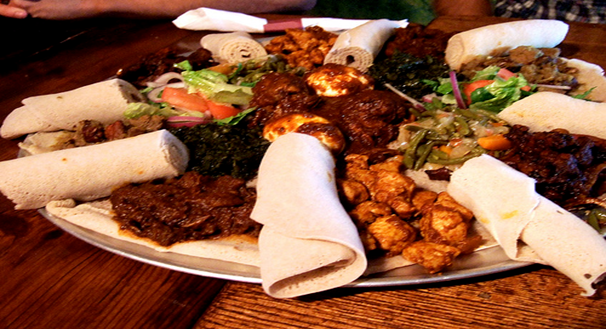 Holidays also have distinctive dishes like doro stew with boiled eggs, chopped collard greens,  kitfo (minced raw beef), tibs (traditionally seasoned and fried meat), gord gored (cubed raw meat) often served with spice and ayibe (crumble cheese) as a side dish to ease the spicy food. There are many delicacies depending on type, size and shape of the meat marinated with several spicy powders.

The Ethiopian culture and tradition is built around this food pattern while the creative dishes differ from place to place and between ethnic groups. The common custom gursha (feeding others with hand) is a popular way of expressing respect and friendship. Larger gursha represents stronger affection. The meal is served in bigger portions which prompts eating in groups. Usually meals are followed by traditional snacks such as dabo kolo (small pieces of sweetened and baked bread) and yegebse kolo (roasted barley mixed with chickpeas and nuts).

Ethiopia has now become closer to the world offering the finest adventure of its high-class food and historical explorations inviting guests through Jovago.com. The leading online booking company facilitates hotel booking with best deals, easy to use services and guaranteed booking offering customers more option from its over 220,000 hotels in the world. It has offices in West, Southern and Eastern African countries recently adding Ethiopia to the list.