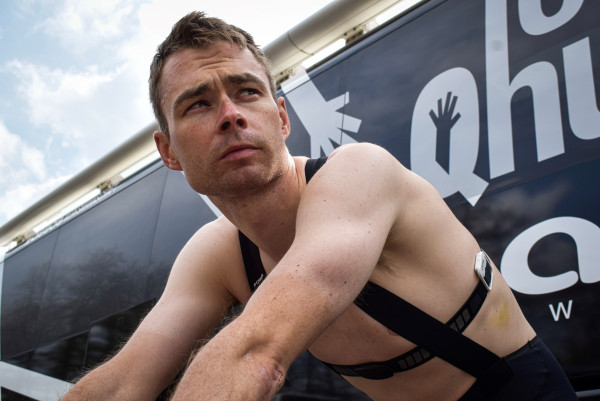 Team Qhubeka ASSOS (www.TeamQhubeka.com) works with the Swiss CORE Body Temperature Monitoring technology to take training and racing performance to the next level.

As a team who has remained on the cutting-edge of technology, we are thrilled to announce our partnership with CORE Body Temperature Monitoring which will gives our athletes and coaches advanced performance insights. While heart rate monitors and power meters are commonplace, core body temperature is vital but has previously been difficult to capture.

Our riders will use the CORE technology which incorporates an advanced sensor to capture accurate core body temperature data which can be used by the riders and our team’s performance coaches optimise training and enable to riders to compete at their best.

Team Principal, Douglas Ryder of Qhubeka ASSOS says, “Energy management is crucial in sport, particularly in endurance sport, and understanding its components like accurate core body temperature and dehydration intensity through wearable intelligent devices like CORE will give us a competitive advantage, and help us improve performance.”

The CORE technology is made by the Zurich-based greenTEG AG who also supply the medical sector and photonics industry with the thermal energy transfer sensors that are used in CORE.

greenTEG AG CEO, Wulf Glatz says, “We were attracted to Team Qhubeka ASSOS because of their sporting achievements and because we identify with the team philosophy. Douglas Ryder and his team have a history of embracing advanced technology on their quest for peak performance and the CORE Body Temperature Monitoring technology fits seamlessly. The new data will assist the riders, coaches and team in closing the gaps. We look forward to working with the team as well as with the team partners ASSOS and VORN on their integrated wearable intelligence for the riders.”

The CORE Body Temperature Monitoring device is a compact unit that clips onto the heart rate monitor strap, it measures live core body temperature metrics and records data directly onto the cycle computer. CORE is built with an advanced, Swiss-made, thermal energy transfer sensor which delivers accurate measurements (0.21ºC). It is the only wearable solution that allows athletes to capture highly accurate core body temperature data without the need for an ingested or inserted thermometer.

About CORE:
CORE is made by greenTEG AG in Zurich, a company founded in 2009. greenTEG develops and manufactures thermal sensors for the photonics and medical industry. The CORE Body Temperature monitoring device was developed as an affordable, wearable and convenient solution to accurately measure core body temperature in a non-invasive manner. Released in 2020, CORE has been adopted by prominent athletes, teams and national sporting bodies.