The relief of indigence is the primary goal in bringing about a positive change in the lifestyles of children in Africa. To this day, 1 in every 5 children in Africa is devoid of the right to education owing to child labor. Since electricity is a dire need of people even in the utmost rural areas, many low-income families rely on kerosene lighting and exorbitantly expensive charging stations (taking up to 15% of their monthly income) to meet their energy needs, forcing children to toil hard to contribute to their income.

That’s why YOLK invented ‘The Solar Cow’ – one of Time Magazine’s 100 Best Inventions of 2019. It’s a solar charging system installed in schools in the backward regions of Africa, allowing children to charge portable batteries called ‘Solar Milk’ while they attend class and take them home at the end of the day. It is a worthful source of energy for charging cell phones and lighting homes at night. It makes for an excellent lamp, lasting up to 3 hours on bright mode and 6 hours on dimmed mode, to help the children study at night. It can also be used as a power bank to charge electronic devices such as cell phones, in contrast to the fact that people earlier spent 4-5 hours traveling to charging stations. It has absolved them of the exertion.

YOLK developed a custom charging socket that only connects to the Solar Cow charging systems so that parents are bound to send kids to school to charge the batteries. They linked the electricity and education problem and found a tangible motivator for parents to send their children to school instead of work, creating fundamental changes in their lives. The projects in Kenya and Tanzania proved so effective in increasing attendance rates, it seemed like wizardry. Interestingly, beneficiaries who select the Give + Data option can access the attendance data of the child who received a Solar Milk from them through a unique ID code, allowing supporters to see the real impact of their altruism.

With the funding from Indiegogo, they will be able to launch this very new project concept to track the impact of Solar Milks and Solar Cows. Delivering real individual data of users in Africa directly to our beneficiaries is something that is unprecedented. You can now buy one as well as donate them one. 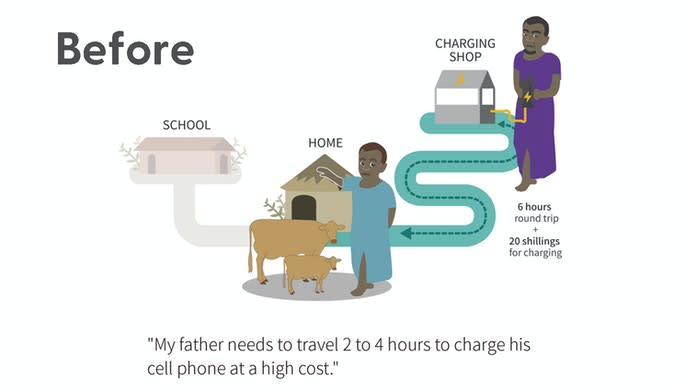 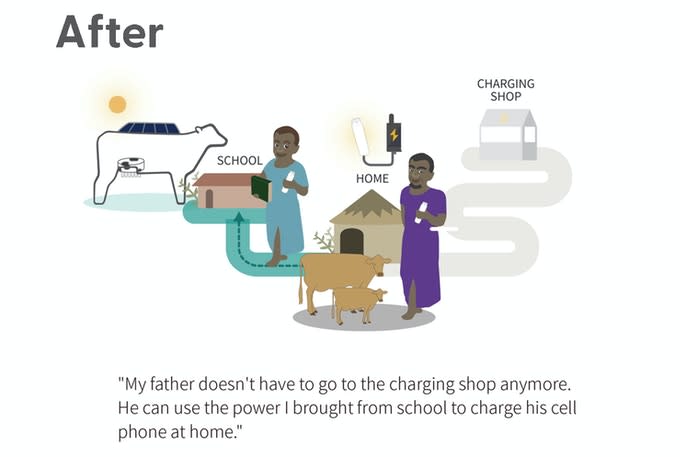 YOLK has received widespread media reporting and several accolades for Solar Cows, including from Time Magazine, an innovation award from the Consumer Electronics Show (CES), and placing in the top three at the Green Tech Awards, all in 2019. In 2018, they also won the aid innovation challenge at AidEx, as well as the iF Social Impact Award. They also received the P4G Partnership Award, the Korea International Cooperation Agency Creative Technology Solution Program, and a partnership with Energy4Impact.

“I was particularly impressed by the increased attendance and retention rates that the Solar Cow initiative achieved [at a pilot project in Tanzania]; the increase in students’ study time; and the environmentally friendly nature is a feature that could enhance the results of UNESCO’s own initiatives.”

The cow in Pokot and other rural areas was just the beginning of something prodigious. Imagine what they’ll be able to achieve if there were a herd full of them.