“The women empowerment era will bring a new dynamic to the Industry. Not to just by empower other women  but also our communities.”
Ms. Eugenia Langa, founder and CEO, Nweba, speaker Angola Energy Series 2021

The first set of speakers has been announced for the first event in the 2021 Angola Energy Series, ‘Women in Energy: Angola Advance’ bringing a pool of experience and knowledge together to help oil gas and energy organisations address how they can create and invest in a diverse, enterprise-wide talent pipeline in Angola and the across the globe.

Angola Country Manager for multinational oil and gas company – TechnipFMC, who has had operations in Angola for over 20 years, Dra. Filipa Vilhena Santos, will be participating in the series for the second time, following on from her insightful presentations in 2020. She will be joined by Mozambican entrepreneur Ms. Eugenia Langa, founder and CEO of the successful specialist procurement and logistics firm Nweba and winner of numerous acolades in leadership.

Finally, sharing her vast experiences from many years of working in the sector will be Ms. Patricia Simon-Hart Founder and Managing Director of oil and gas service company Aftrac Limited as well as the co-founder of the Women in Energy Network (WIEN) set up to foster gender balance and development. 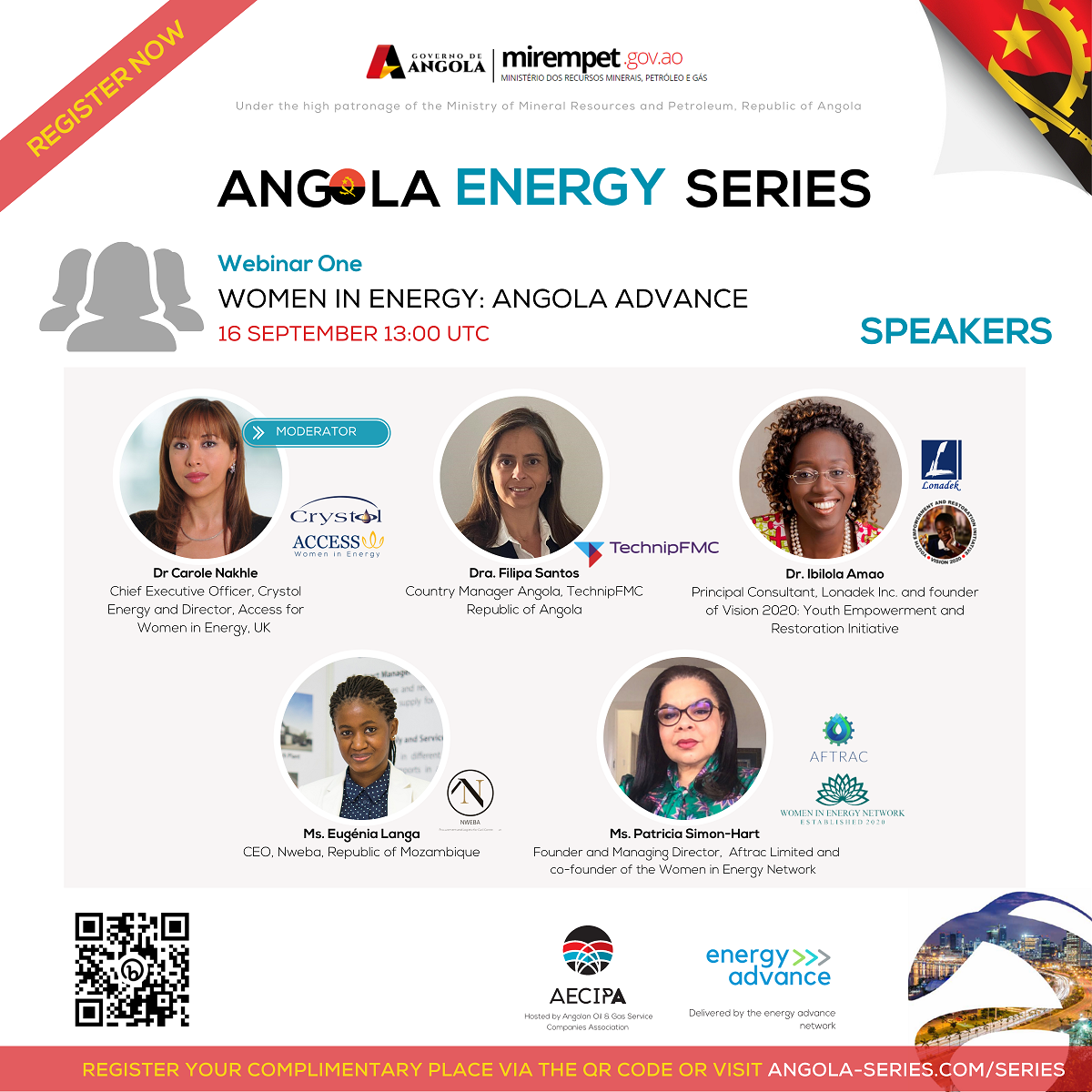 Proceedings will be moderated by Dr Carole Nakhle, Chief Executive Officer of Crystol Energy and Director of Access for Women in Energy (AccessWIE) – one of the oldest groups established to support the development of women in the energy industry, globally.

The webinar will take place at 1pm UTC on the 16th September and will cover,

Mr Bráulio de Brito, President, AECIPA and Chairman of the Angola Energy Series commented; “Currently women only make up around 18-25% of the oil and gas sector globally. There is a real need for our organisations to work collectively to eradicate the unconscious bias that currently plaguing it and stagnating its growth. The speakers for our first webinar will bring both a national and international perspective and their experiences and knowledge, to really help in building some of the missing key foundations to further advance women within the oil and gas Industry.”

Women in Industry is the first of four free to attend webinars, part of the Angola Energy Series, ahead of the 2nd Angola Oil and Gas Service and Technology Conference (AOTC) which will take place in Luanda from 23-25 November. AOTC 2020 was hosted under the high patronage of the Angola’s Ministry of Mineral Resources and Petroleum, with in-depth participation of over 50 speakers, engaging with an audience of more than 1,250 people from 43 countries across the globe. In addition, over 300 video meetings were held between delegates and more than 5,000 messages exchanged via the event platform.

This year’s  Angola Oil and Gas Service and Technology Conference, will again happen under the high patronage of the country’s Ministry of Mineral Resources and Petroleum. The conference will run from 23 -25 November 2021 at the InterContinental Hotel, Luanda with virtual access options also available via the energy advance network. It is hosted by the Angolan Oil & Gas Service Companies Association (AECIPA) in partnership with international event organiser GEP. For full details and for dates and further information about the Angola Energy Series of webinars, visit www.angola-series.com