The post Covid-19 period has pushed Africa’s oil and gas industry to adapt to a very different paradigm and one revolving around hydrocarbon divestment and increased renewable energy focus. As the pandemic and related financial fallout drove oil prices down and well beyond sustainable thresholds during 2020, projects across the continent were delayed or abandoned entirely. This has been compounded by the growing risks to financing posed by the global divestment movement, with some of the continent’s largest financiers announcing a gradual draw down on hydrocarbon financing. One silver lining amid this uncertainty is the renewed interest in the exploitation of natural gas and its refined products which serve as an equally effective and less polluting stand-in for crude in both energy generation and transportation activities, and could become not only a key export for African economies but also a vital source of baseline power capable of storing energy in diversified grids composed of renewables.

The culmination of factors in global oil demand and the onset of Covid-19 has pushed a realignment in strategy for major African producers toward offshore focus for new projects. In North Africa, new onshore developments have stalled in Egypt’s Western desert with attention shifting offshore, with the same being evident among West and East African projects in markets like Ghana, Nigeria, Senegal and Tanzania. In Central Africa, Cameroon, Equatorial Guinea and Gabon remain valuable contributors to regional offshore exploration and production, and though often overlooked destinations for development into new infrastructure continue to offer potential in the offshore space. In the Southern African oil and gas space, with the exception of Angola who has shifted attention downstream, Mozambique and South Africa are seeing and could see additional offshore investment providing security and stability (Mozambique) and sound regulation (South Africa). Onshore developments are nonetheless evident in East Africa through the recent launch of South Sudan’s first oil license bidding round and the start of the East Africa Crude Oil Pipeline (EACOP) earlier in the year. 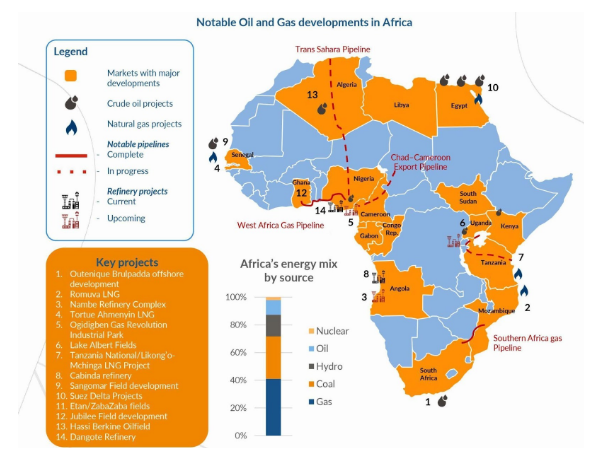 A wave of legal changes and policy modernisation has swept the continent in the last few years driven by three key motivations The first is the pronounced liberalisation of laws to incentivise foreign firms to invest further as seen in various states including top producers Angola and Gabon, but also in nascent markets such as Somalia. The second are populist policies which in a way act to counterbalance the first objective and serves as a means by which countries with more significant oil and gas potential seek to extract more value through higher taxes and steeper local content requirements. Amidst the tug of war between liberal and nationalist policies there is also a third driver which manifests in the form of a push by African legislatures to bring extractive policies in line with global best practices. This new emphasis on the protection of the environment and human settlements, and the consent and beneficiation of local communities, is a commonality across all markets regardless of their political orientation with Kenya’s Petroleum Act of 2019 and the more recent Nigerian Petroleum Bill being two examples of this trend.

The overarching shifts toward cleaner fuels has and will continue to change the African oil and gas industry. A core strategy by a number of governments in positioning for this shift has been to increasingly leverage under-explored natural gas reservoirs in supporting upcoming energy initiatives in power generation and transportation. As demand for the resource grows given its more limited carbon footprint in comparison to oil and coal, a number of developed and emerging African hydrocarbon suppliers, including Nigeria, South Africa and Tanzania, have the opportunity to capitalise on this and position local extractives and power generation industries to better integrate in providing energy security for the future. Key to all of their success is stable gas supplies, developed supply chains and favourable fiscal terms for further engagement.

The economic logic underpinning the oil and gas industry has changed considerably over the last decade which in turn has changed the strategy for project financing. A stricter legal regime following the global financial crisis of 2008 and the oil price slump since 2014 has resulted in a tougher investment environment in Africa with only the most risk-tolerant oil and gas majors providing greenfield financing along with technical expertise, with the remainder coming from investment banking consortiums and governments. Foreign venture capital firms tend to predominate but local players have become increasingly active in recent years, including South-African based Standard Bank, which has actively invested in East African projects including the Rovuma gas fields and the EACOP. Presently project financing faces two key risks; persistently-depressed oil prices which have thinned margins and caused investors to avoid nascent developments especially onshore, and the renewed push for fossil fuel divestment in favour of green energy which risks making it impossible for private consortiums to justify project financing in the long-term.

Though progress has been made in terms of value chain diversification there is still room for improvement when looking at infrastructure development to support the oil and gas industry. This is reflected by the growing move away from purely upstream activities that have dominated the extractives industry in large African producers, and toward economies which look to incorporate more midstream and downstream operations through infrastructure development. Crude oil and natural gas pipelines have begun to proliferate across the continent in recent years, and refinery operations are similarity becoming more and more common aided by local content requirements aimed at enhancing the technical expertise of domestic economies. In the downstream space current and future producers have shown a strong pivot towards exploiting the full potential of gas not only as a good for export but as a source of energy generation and utility for domestic and industry use. This move is becoming more evident in a number of prominent economies including Kenya, Nigeria and Tanzania who have begun to build-in mechanisms for gas to generate additional power capacity, with South Africa also making concerted effort to add more gas to its power generation programme in moving away from coal. 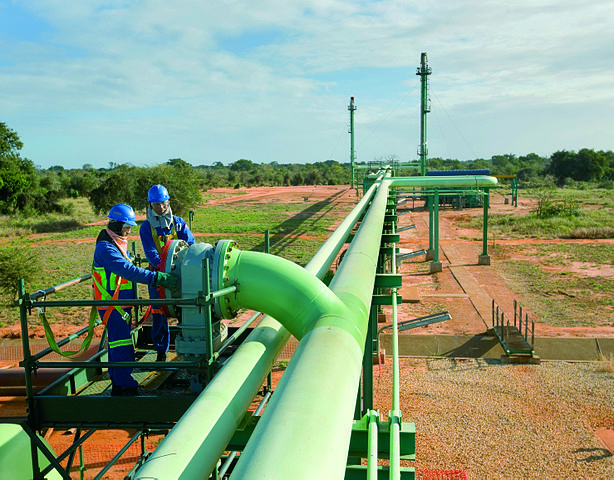 Sasol workers operating on a gas pipeline in Temane, Mozambique. Such pipelines will play a critical role in realizing the continents ambitions of creating a an LNG enabled economy.

To find out more about how the African oil and gas industry is set to evolve over the coming years click here to access the full report: https://bit.ly/2WISqRV

In On Africa (IOA) is a Johannesburg-based research, advisory and publishing firm founded in 2007. IOA specialises in a wide range of research and intelligence services that are solely focused on Africa and cover numerous industries including banking and finance, education, energy, legal, mining and minerals, and telecommunications. IOA is able to provide key insights related to domestic developments across 30+ market through its vast network of over 300 consultants. IOA’s mission is to inform strategic decision-making to accelerate growth on the continent and provide the necessary support to both private and public actors in achieving this objective. For more on IOA visit: www.inonafrica.com