Seriously who would not like a colorful most glamorized Carnival street parties. Let your good times roll at Ethiopia’s unique Ashenda festivals. The celebration is exclusive to Lasta Lalibela, North Sekota and Tigray. It is known as “Ashenda” throughout Tigray, “Shadey” in Wag Hemra and by “Solel” in Raya Kobo. Costumed revelers board throwing beads of flower and palm shaking their shoulder to the beat of a traditional instrument called kebero.

If you like street celebration then you have come to Ethiopia on the right season. Jumia Travel shares its witness to Ashenda upcoming celebration at Lasta Lalibela, North Sekota and Tigray marking the end of a two-week-long fast known as Filseta. Shadey (Ashenda) is a joyous outburst of tradition that engulfs locals with cheer while providing an adventures photogenic entertainment for travelers lucky enough to crash the party. Ethiopia has other carnivals but Ashenda is a notable exception with its unique styles. 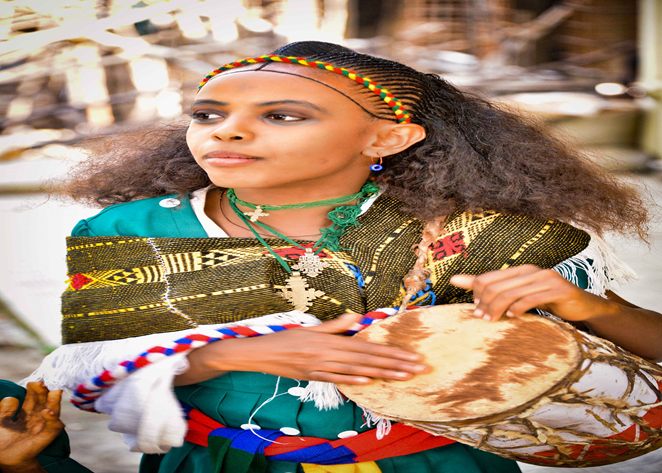 Early in the morning girls dressed up in their traditional clothing and hairdo hit the streets wearing palm tree levies around their waists.  It’s tradition that the festival, blends large yummy cooking, coffee as well as grass strewn on the floors of homes and shops representing a welcome mat and the celebration. It is an event of women where they portray their culture and beauty impressing the men who will gather around to choose their future wife. Their dress is made of cotton decorated by hand creating an amazing embroidery. The girls also adorned themselves with array of big gold and silver jewelries. Young girls dressed in beautiful traditional outfits called tilifi and yehabsesh kemis sing and dance on the streets and from house to house for consecutive three days starting from 22nd of August.

Although every women is allowed to take part on the carnival men identify the unmarried girls through their different hairdo. The hairstyles are predetermined based on age and marital status. The hairdo with shaved hair on the side of their head leaving some hair around the head represents youth and unmarried status while the full braided hair represents a women is already taken and she is untouchable by other men.

The majority of the celebration involves singing and dancing in public. Young women sing around the village and on the streets giving freshly picked bouquets of flowers and palms to each household portraying the unique culture. The girls will be given local breads known as difo dabo, hibest, himbasha or money to show appreciation of their song and gifts. The songs include love and appreciative poetry made for each household and person on the street while the dances known as eskista or sasiet show the local flavor kept for generations.

Celebration follows with ornate coffee and food serving ceremony at a large get-together of family and friends. The coffee ceremony is conducted by a woman, dressed in the traditional costume of a white dress. The long process starts with the ceremonial apparatus – sinny (ceramic cups) jebena (clay pot) being arranged upon a rekobot (traditional wooden tray) and scattered freshly cut grass on the floor. It is a big part of the day to slaughter chicken or sheep that will be eaten with several family members, guests and neighbors marking the end of the fasting season.