The bi-annual Global Retail Development Index (GRDI), which is a study of the global retailing landscape has revealed Africa is poised to move away from traditional retail models and become the fastest-growing, richest, and most sophisticated market in the world.

Prashaen Reddy, a partner at management consulting firm Kearney says that this is thanks to the explosive growth of young, urban, and digitally savvy consumers; increasing mobile phone penetration; the creation of digital payment and shopping networks; favorable governmental regulations and spending initiatives; and significant investment by both foreign and domestic companies.

In the most stable times, retailers expanding their global footprint face a series of difficult decisions. Yet in the wake of COVID-19, together, these forces are transforming the face of African retailing and providing a blueprint for the development of other emerging markets, seeing Morocco, Egypt and Ghana making the top 10.

Determining which markets are growing, attractive, and relatively risk-free is one of the goals of Kearney’s GRDI which ranks 35 emerging countries based on a set of 26 factors, including four key variables: country risk, market attractiveness, market saturation, and sales growth.

Questions GRDI asked were, should retail enter new markets? Expand their operations in emerging nations that may or may not be yielding returns, or cut their losses? How to evaluate the comparative potential of modern retailing in nations still dominated by informal or traditional vendors? These are some of the questions Kearney’s Global Retail Development Index (GRDI), which tracks selected emerging retail markets, was created to answer (see figure 1, attached at the bottom).

Reddy adds, “The global population is expected to increase by 2 billion by 2050, and Africa will be home to the majority of these new lives. The population of sub-Saharan Africa (SSA) alone is expected to double by 2050, with Nigeria expected to be the third-largest country in the world.”

This is one of the reasons we will see the growth in Asia begins to slow down and Africa emerge as the next big retail hotspot. It’s also predicted SSA will enjoy the highest rate of disposable income growth on Earth, about 9% CAGR.

With South Africa not making the top 30, we need to look at the were and why South Africa fits into the closing bracket within the GRDI property scale of window of opportunities. This means consumers are used to more modern retail, the discretionary spending is higher and there is a fierce competition from both local and foreign retailers. This closing segment is where investments are ripe for acquisitions.

In the face of increasing competition and margin pressures, Africa’s retailers are focusing on ROI; adopting franchising and other new business models; and rationalizing store footprints following the lead of Massmart, which recently announced it would be closing the 8% of its stores that were underperforming which includes plans to double down on African countries, focusing on price, private label, and building customer loyalty.

“The main challenges are corruption, widespread poverty, security concerns, supply chain issues, lack of infrastructure, active conflicts, archaic governmental retail policies and practices, and isolation, which are as real as the potential. At 18%, for example, SSA has the lowest rate of intra-regional trade on the planet,” says Reddy.

Retailers and central banks in various countries are working toward developing and facilitating digital ecosystems by reducing transaction costs on electronic payments, but gaps in e-payment infrastructure supply, logistical inefficiencies, and trust issues are slowing down both existing and future growth opportunities, with Africa accounting for about 50% in mobile money transactions globally. 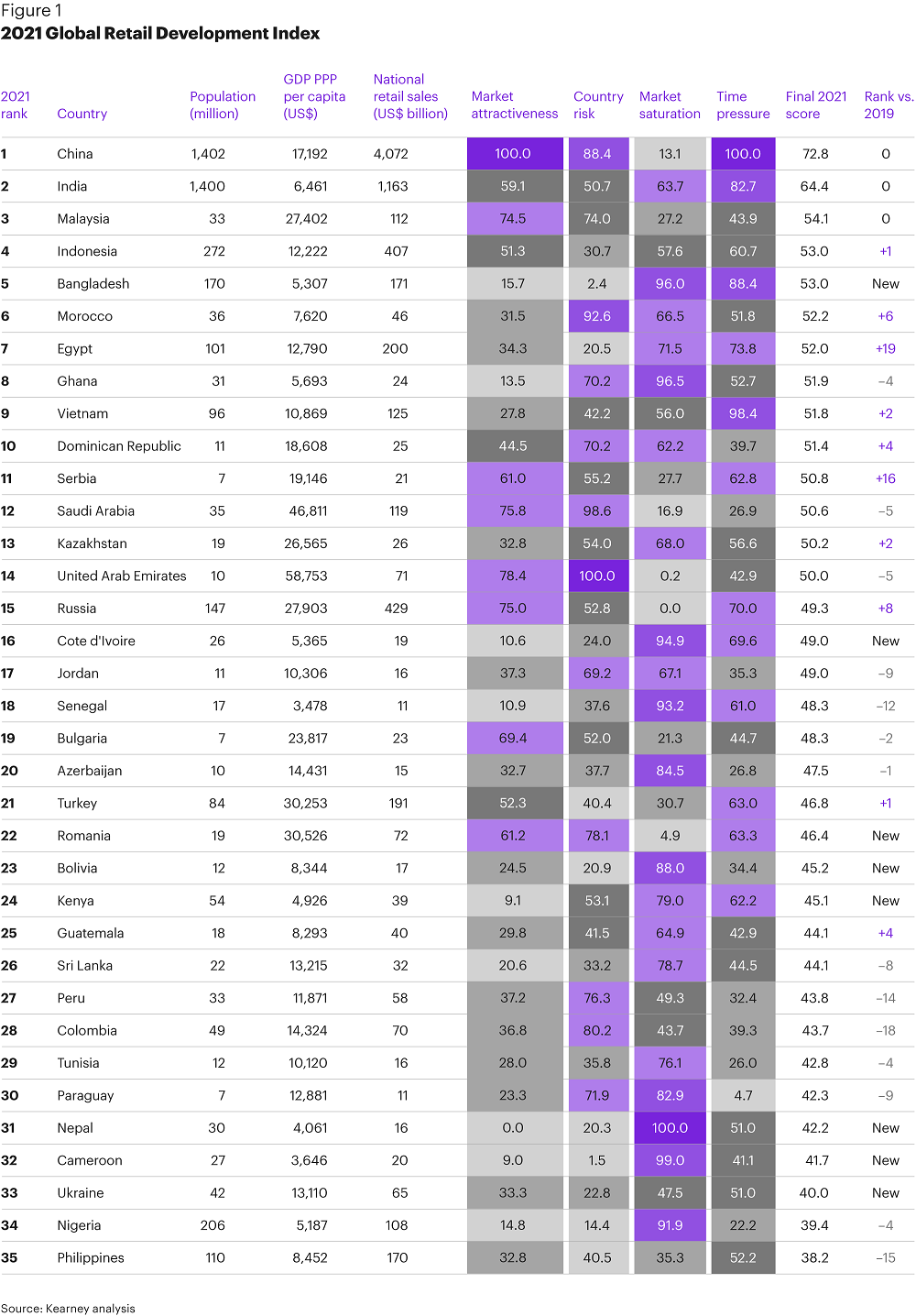 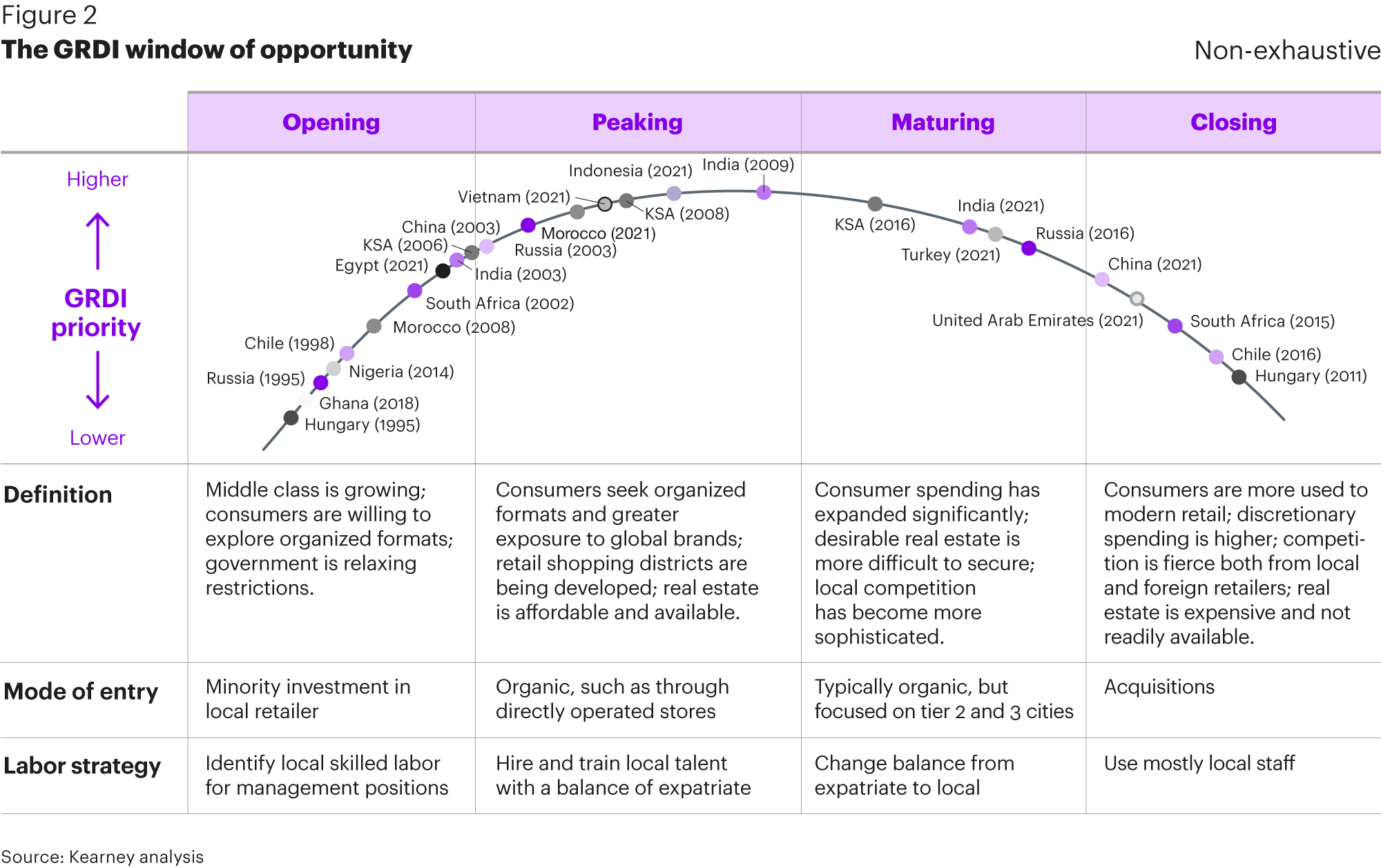 So, what should we take from the 2021 GRDI report?

Reddy concludes by saying “that the real lesson is that all things, especially markets, change —often, as in the case of COVID-19, with little or no warning. So, there is no effective substitute for contemporaneous in-market knowledge.”

For past editions of the Global Retail Development Index, click here.